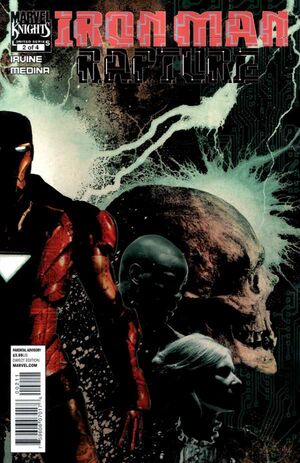 4-issue Marvel Knights limited series! A pulse-pounding cyberpunk thriller by Alexander Irvine (The Narrows) and Lan Medina (Deathlok: The Demolisher). The future belongs to Tony Stark. So when a violent heart attack pushes the billionaire playboy and visionary inventor to the brink of death, he’s not about to go down quietly. Enter Stark 2.0 – a fusion of man and machine unlike anything the world has seen before, an entity that will push its host past the brink of sanity as it attempts to recreate the world in its own image. With Stark Industries in lockdown, it’s up to Starks’s associates Pepper Potts and Jim Rhodes to stem a technological virus that might well contaminate the entire world. But to save the day, they’ll need Tony’s help – if, indeed, there is anything left of him.

Retrieved from "https://heykidscomics.fandom.com/wiki/Iron_Man:_The_Rapture_Vol_1_2?oldid=1436383"
Community content is available under CC-BY-SA unless otherwise noted.