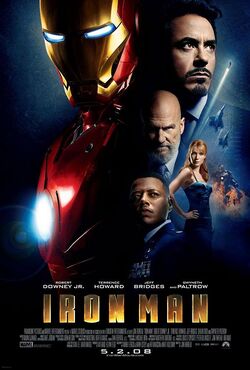 During a trip to Afghanistan to demonstrate his company's new weapon system, Tony Stark was attacked and kidnapped by a terrorist group called the Ten Rings.

Thirty-six hours earlier, at an award ceremony, US Air Force officer James Rhodes had prepared to give an award to Tony, but Stark was absent playing poker at a casino. Stark's business partner accepted the award on his behalf. Rhodes later found Stark and expressed his disappointment at the absence. Preparing to leave, Stark was approached by a reporter, Christine Everhart. Stark and Everhart ended up having a one-night stand. Afterwards, Tony's assistant prompted Everhart to leave.

left|thumb|250px|Stark forges the MK I armor

Several hours later, Tony demonstrated "Jericho", his revolutionary multi-warhead cluster bomb missile, to the US Air Force. Shortly thereafter, the kidnapping occurred and the terrorists revealed that they wanted Stark to build them a version of the Jericho weapon. Stark was forced to comply, although over the next three months he built a crude but very strong power armor instead.

Stark gained the aid of fellow captive Dr. Yinsen during his time working on the secret project. Together they married a miniature arc reactor of Stark's design to an electromagnetic pacemaker protecting Stark's heart from the embedded shrapnel in his chest. Once he was free from the immediate threat of his heart injury Stark proceeded to construct a weapon system for himself under the guise of the missile system that his captors thought he was making. When the armored suit was completed, Stark then made his bid for escape.

Dr. Yinsen was killed during the escape, although Stark himself managed to get away, later to be picked up by the U.S. Air Force in the desert. Upon returning to the United States, Stark declared that Stark Industries would no longer manufacture weapons, a move which his business partner and second-in-command CEO Obadiah Stane informed him was blocked by the board members shortly after.

During his self-imposed sabbatical from public life, Stark tinkered with the design of his power suit, refining it for flight capability, and built a more powerful and reliable arc reactor, both to power his pacemaker and power the suit. Meanwhile, Raza, the leader of the Ten Rings terrorist group, dispatched his men to recover the Mark I armor from the desert where Stark had abandoned it. After finding the armor, Raza ordered his men to rebuild it again.

During Stark's first public appearance since his kidnapping Everhart showed him pictures of Stark Industries weapons in the hands of terrorist groups (particularly the Ten Rings), including the system he refused to build for them. He also discovered that Stane had been "dealing under the table" to both sides in the conflict, as well as being the one to shut Stark out of the board while he recovered. Faced with the realization of what his company had done, Stark donned the power suit and flew to Yinsen's village of Gulmira in Afghanistan; rescuing the villagers from the terrorists by employing his armor's weapon systems. Iron Man also grabbed one of the terrorists' leaders and left him at the mercy of the villagers. Raza watched Iron Man flee to the weapon stockpiles.

After a brief battle with an enemy tank, Iron Man destroyed their weapon stockpiles, but accidentally drew the attention of two patrolling jet pilots of the United States Air Force. After a supersonic dogfight between Stark and two F-22s, one jet was damaged in Stark's attempt to hide, forcing the the pilot to eject. The pilot's ejection seat malfunctioned but Stark managed to save the pilot's life. After this ordeal, Stark revealed his Iron Man identity to Rhodes and Rhodes covered it up by stating that the incident was "a training exercise".

After viewing the news of the Gulmira F-22 incident, Stane went on a business trip to the Ten Rings' encampment in Afghanistan, where it became apparent that Stane had paid and ordered the Ten Rings to kill Stark. Raza reported that Stark had perfected his armor design into the Mark III armor leading the conspirators to broker a deal: The Mark I armor designs for Stane and in exchange "the gift of iron soldiers" to Raza and his terrorist followers. Stane ultimately betrayed Raza by incapacitating him with an amplified sound paralyzer and ordered his guards to kill all of Raza's men. Stane then secretly contracted Sector 16 at Stark Industries to use the armor designs.

Determined to make amends for his mistakes, Stark sent his assistant Virginia Potts to find the shipping records of Stark Industries in order to track down the illicit weapons shipments and destroy them. While hacking into the system she discovered that it was Stane who had hired the Ten Rings to kill Stark, but they had reneged on the deal when they realized who the target was. She also discovered that Stane had recovered the power suit prototype, and had reverse engineered his own version.

Stane took Stark's arc reactor to power his suit after learning that his scientists in Sector 16 were unable to copy Tony's ingenious miniaturization of the company's larger design. Neutralizing Stark with the sonic paralyzer, Stane revealed his involvement in the kidnapping while Stark was immobile and unable to stop the theft. After briefly expounding upon his agenda of world domination and the ideals of power in the corporate business, (particularly stating that ark, Tony's father, helped the atomic bomb become a reality), Stane left Stark for dead.

Rhodes went to Tony's house after being told of Obadiah's machinations by Pepper. There he found Stark putting on the Mark III armor after Stark had retrieved his first arc reactor with the assistance of a robotic arm. He asked Stark if there was anything he could do to help, and Tony simply responded by asking him to keep the skies clear. After Stark left, Rhodes gazed on the Mark II armor and said, "Next time, baby!" (a nod to War Machine).

Meanwhile, Pepper and several S.H.I.E.L.D. agents attempted to arrest Obadiah at Stark Industries headquarters, but Stane had put on his Iron Monger armor and ambushed them. Just before Iron Monger could kill Pepper, Stark (as Iron Man) intervened and fought him out onto the streets. Their epic battle soon took them to the skies where Iron Man seemingly defeated Iron Monger when Stane's armor iced up at high altitude.

Both combatants then fell, each managing to re-engage critical systems to slow their descent and land atop the Stark Industries building. Iron Monger proceeded to beat Iron Man but in a last ditch effort, Stark ordered Pepper to overload the large arc reactor powering the building. The resulting blast killed Obadiah and incapacitated Tony.

The film ended with a press conference about the battle. Although advised by S.H.I.E.L.D. agent Coulson to claim Iron Man is his personal body guard and corporate mascot to hide his identity, Tony instead announced that he was Iron Man. After the closing credits, Stark was greeted by General Nick Fury, director of S.H.I.E.L.D., who informed him of the Avenger Initiative.

Retrieved from "https://heykidscomics.fandom.com/wiki/Iron_Man_(film)?oldid=1579422"
Community content is available under CC-BY-SA unless otherwise noted.