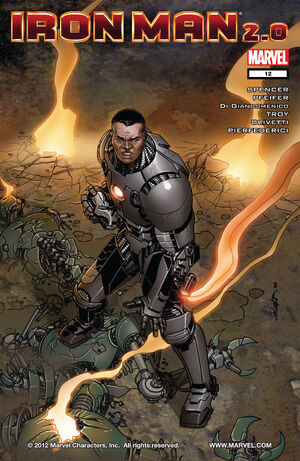 The world is in the balance as War Machine races to take down global terrorist Palmer Addley once and for all! It’s an all-or-nothing battle of wills as Rhodey presses every advantage, tests every skill, and depends on every relationship to finally outsmart, outfight and outlast his greatest enemy and become the twenty-first-century War Machine...or die trying!

Final issue in the series.

Retrieved from "https://heykidscomics.fandom.com/wiki/Iron_Man_2.0_Vol_1_12?oldid=1723735"
Community content is available under CC-BY-SA unless otherwise noted.