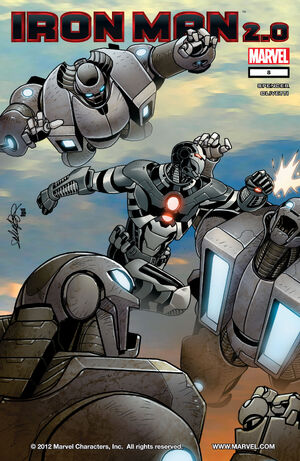 Appearing in "The Palmer Addley Infection"Edit

New arc! Yet another perfect chance to jump on!

When War Machine’s weaponry fails him against a super villain he can’t tackle head-on, Rhodey must use his brains – and his all-new, bleeding-edge armor – to fight a NEW battle...21st-century style!

Retrieved from "https://heykidscomics.fandom.com/wiki/Iron_Man_2.0_Vol_1_8?oldid=1435781"
Community content is available under CC-BY-SA unless otherwise noted.