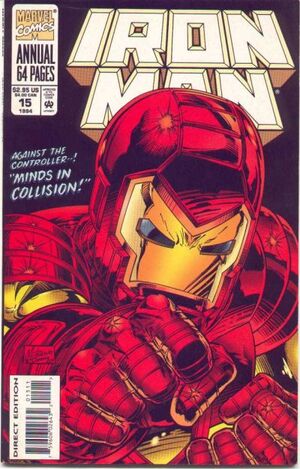 Appearing in "Minds in Collision"Edit

Synopsis for "Minds in Collision"Edit

A land developer bribes a senator, a man prepares to kill a prostitute, and another man has just killed a woman who spurned the Controller in high school and prepares to kill himself; they are all puppets of the Controller. The Controller then watches his Berserker slaves kill each other in gladiatorial combat, and makes a crowd of his minions applaud. As he continues to multitask, the Controller makes Bob Peterson attack other Stark Enterprises employees. Iron Man arrives to stop Peterson and bring him down to the medical lab where Erica Sondheim checks him out. Stark suspects that he's under the Controller's influence, but Erica can't find any evidence of it. Meanwhile, the Controller checks on Sarah Jessup, a psychic mutant and the source of his new powers. Stark tells Bethany he plans to tackle the Controller, using image inducers to disguise himself as a Berserker to get into his foe's base, but the Controller is ready for him, having eavesdropped through Bethany, and his Berserkers capture Iron Man. Controller attempts to gain control of Stark, but overloads his systems, causing Sarah to become Mindstorm as her psychic power raged out of control. Insane and enraged by what the Controller had done to her, she attacked him, but Iron Man disabled the equipment connecting Mindstorm to Controller, leaving Controller catatonic and apparently destroying Mindstorm in the process.

Retrieved from "https://heykidscomics.fandom.com/wiki/Iron_Man_Annual_Vol_1_15?oldid=1435811"
Community content is available under CC-BY-SA unless otherwise noted.