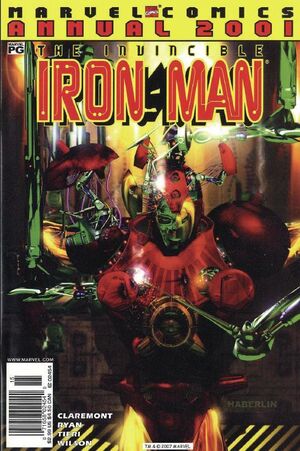 Be it known that these folk be under the protection of the Mighty Avengers.

Realizing that Sarawak wants to obtain the Iron Man armor to aid their own armaments, Tony tries to keep a low profile but comes to the aid of a young boy, Kiko, being harassed by a street gang; they prove more than he can handle, until the boy's mother, Anna, steps in, displaying impressive martial arts prowess. The gang flee, but the police arrive, and realizing that Anna is scared of them, Tony sacrifices himself, drawing the cop's attention so she and her son can get away. With his wallet misplaced in the altercation, Tony is arrested for being without ID, but Anna posts his bail. Returning to her home, Tony watches with concern as Emma is threatened by the local gangster Po and his protection racket. He helps her with her computer repair business, and admires the virtual-reality skin web suits she designed. He finally comes clean with Anna about his mission in Sarawak and she agrees to help. However, Kiko finds Tony Stark's card device, and uses it to find Tony's armor and turns it over to Po, hoping to pay off his mother's debt. Tony and Anna don skin web suits and go to rescue Kiko; when the gangsters start shooting, Anna places him inside the armor for protection, but on automatic reboot, it locks with him inside. Using skin web, Tony remotely controls the armor, and with Anna's help, Iron Man outfights the Interceptors that have raced to confront him. All three try to flee Sarawak; the EMP prepares to shoot Iron Man again, but the Avengers come to Iron Man's aid and Thor blocks the attack. Tony brings Anna and Kiko to San Francisco, where Anna is given an R&D facility to operate and Tony arranges for the tape worm virus to be uploaded into Sarawak's old Interceptors, rendering them useless.

Appearing in "Black and white"Edit

Synopsis for "Black and white"Edit

Retrieved from "https://heykidscomics.fandom.com/wiki/Iron_Man_Annual_Vol_1_2001?oldid=1435814"
Community content is available under CC-BY-SA unless otherwise noted.