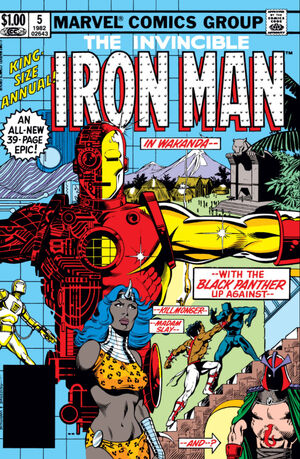 I will not allow you to take Wakanda away from me, Killmonger!

Appearing in "War and Remembrance!"Edit

Synopsis for "War and Remembrance!"Edit

In Wakanda, Black Panther exercises with his guards. At Stark International, Iron Man tests some new government weapons. In Wakanda, a warehouse containing Stark International energy hologram crystallography equipment is destroyed. The next day Stark arrives in Wakanda where T'Challa informs him of the recent attack. After devising a plan, Stark attends a dinner where Madame Slay kidnaps Roades and Killmonger's men apparently kill the Black Panther. At the Black Panther's funeral Killmonger appears, taking the Black Panther mantle. Iron Man and Black Panther proceed with their plan, now that the LMD has drawn out the villain. They sneak back into T'Challa's palace just after Madame Slay informs Wakanda of Killmonger's return from death, the Black Panther arrives, surprising everyone. A battle ensues, and as the heroes gain the upper hand Madame Slay reveals she has Rhodes captive. Iron Man uses his life sensors to find Roades at the Vibranium mound, where a cyclotron has been set up. It's pounding the vibranium with gigawatt baryon beams, turning it into anti-metal, which will dissolve all metal in Europe, Asia, and Africa. Iron Man disables the machine and saves Roades. Meanwhile, Black Panther defeats Killmonger, whose body reverts to a skeleton. In China, the Mandarin realizes his plan has failed.

Retrieved from "https://heykidscomics.fandom.com/wiki/Iron_Man_Annual_Vol_1_5?oldid=1435801"
Community content is available under CC-BY-SA unless otherwise noted.