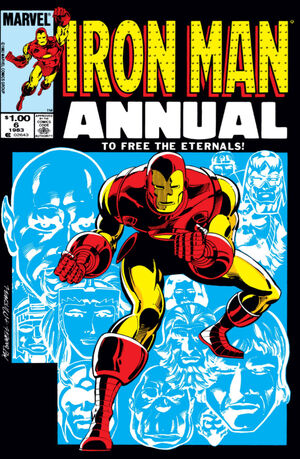 Appearing in "In Dreams What Death May Come!"Edit

Synopsis for "In Dreams What Death May Come!"Edit

Over Holland, Iron Man tests the capabilities of his armor with the help of the 32nd tactical flight squadron. His armor's module malfunctions and he's flown to Olympia, home of the Eternals, where deviants attack them. Thinking he's a robot, Kro orders the deviants to dismantle him. The armor unfreezes and Iron Man breaks free, finding a room full of immobilized Eternals. He watches as a molecular disruptor disintegrates an Eternal; his energy is fed into Brother Tode, who seeks eternal life. Kro revives Thena and offers to take her away from Olympia if she will spend her life with him. She refuses so he puts her back in stasis. Unable to revive her himself, Iron Man asks the computer where the nearest energy source is so he can recharge. The computer indicates the dead Zuras, so Iron Man takes Thena to him. She wakes up insane, her powers manipulating her clothes and surroundings, the Iron Man armor transformed into a toga. Roades snaps her out of it, but Kro arrives before she can restore his armor and puts another brain mine on her. Rhodes escapes, the computer making him another suit of armor. He then hooks Zuras up to the computer, reviving all the Eternals, who quickly defeat the deviants. Thena starts campaigning for the Eternals to leave Earth. As the Eternals wrangle over the suggestion, Ikaris tells Iron Man the celebration party is over at his place.

Retrieved from "https://heykidscomics.fandom.com/wiki/Iron_Man_Annual_Vol_1_6?oldid=1506520"
Community content is available under CC-BY-SA unless otherwise noted.