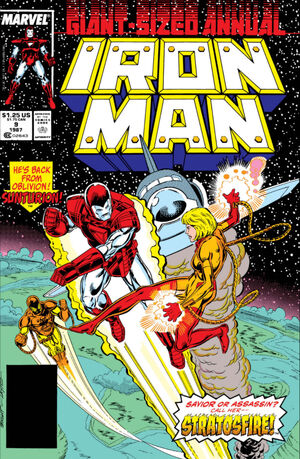 Part of me wants to pulverize that woman! But another part knows that her ends are noble. Even if her means are misguided.

An oil tanker slams into the support strut of the Golden Gate Bridge. Iron Man arrives to affect rescue operations, but finds himself upstaged by the newest super-hero in town - Stratosfire. Stratosfire uses her microwave powers to give Iron Man an assist and the grateful crowds on the island flock to her. Stratosfire is the most recent corporate sponsor of the Roxxon Oil Corporation. Tony is miffed that the bridge survivors are gravitating towards Stratosfire rather than he, so he flies back to Stark Enterprises.

After snapping at his public relations director Marcy Pearson, Tony goes into his office where he has a conversation with Jim Rhodes. He tells him how Stratosfire's powers are reminiscent of Arthur Dearborn - the former Roxxon corporate sponsor who went by the name of Sunturion.

Later, Stratosfire, in her civilian identity of Sandy Vincent, goes to her penthouse where she talks with her friend Babs Bendix. Babs is concerned that her friend is just becoming a tool for the company, and she doesn't completely trust Roxxon's intentions. Babs later takes it upon herself to meet with Tony Stark and express her concerns.

Meanwhile, Jonas Hale of the Roxxon Corporation has Stratosfire attack a corporate rival in the Central American nation of Costa Gavras. Stratosfire doesn't like using her powers for destruction, but she trusts that everything she does is in the best interests of Roxxon, and as such, the world.

When Jonas Hale learns that Babs Bendix has been revealing information to Tony Stark, he decides to have her killed. When Stratosfire hears of the news, she turns against Roxxon and attacks their new San Francisco facility. She tears a hole through their penthouse facility, declaring that she is now going to use her powers to save the world from the dangers represented by companies like Roxxon. Jonas Hale's assistant Douglas Bravner recommends activating the Zed Control.

Stratosfire goes to destroy a nuclear power plant and runs into Iron Man. The two begin fighting in the air, and Iron Man realizes that she may be powerful enough to defeat even him.

Retrieved from "https://heykidscomics.fandom.com/wiki/Iron_Man_Annual_Vol_1_9?oldid=1525193"
Community content is available under CC-BY-SA unless otherwise noted.