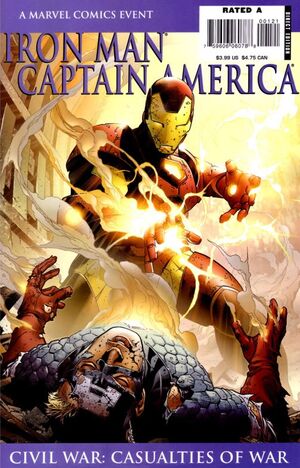 And I know registration won't stop every tragedy, but people in our position need accountability. Someone who, if I'd killed those men, would have thrown me in jail where I belonged.

Iron Man and Captain America meet in secret at the abandoned Avengers mansion to work out the Civil War one last time. They debate their views on the registration act while talking about past conflicts. This results in a hand-to-hand fight, with Iron Man out of his armor and Captain America without his shield. Both men ultimately go their own seperate way with neither having changed their views on the conflict.

Retrieved from "https://heykidscomics.fandom.com/wiki/Iron_Man_Captain_America_Casualties_of_War_Vol_1_1?oldid=1435820"
Community content is available under CC-BY-SA unless otherwise noted.