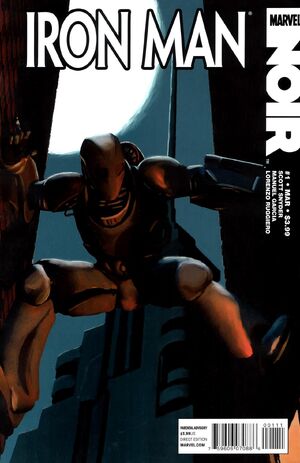 In 1938, Tony Stark is a daring adventurer, traveling the world in search of its mythological treasures and trying to forget the responsibilities of an iron magnate. From the Fountain of Youth to the hanging Gardens of Babylon, Tony has conquered them all…but only his closest confidants know it’s all one last-ditch effort to cure the disease that slowly killing him. But someone has been selling out Stark Industry secrets to Count Nefaria and his Nazi sympathizers, and it’s only a matter of time before they catch up with Tony on his latest quest!

Retrieved from "https://heykidscomics.fandom.com/wiki/Iron_Man_Noir_Vol_1_1?oldid=1518331"
Community content is available under CC-BY-SA unless otherwise noted.