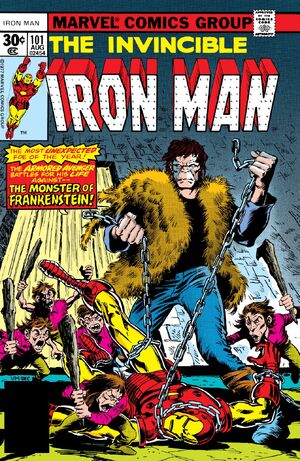 You either serve me -- or die!! For none dares defy -- the Dreadknight!

Appearing in "Then Came the Monster!"Edit

Synopsis for "Then Came the Monster!"Edit

Following his battle with the Mandarin, Iron Man flies across a Chinese military airfield. Low on power, he commandeers a fighter jet and takes off. A group of soldiers ask their superior, Major Wu, why he didn't retaliate, to which he replies that Iron Man's efforts to rid them of the Mandarin have earned him a bit of latitude with the Chinese government.

Tony flies across Asia, then India and over the U.S.S.R. As he makes his way across the globe, Stark ponders his most recent debacle with the Mandarin. He is shocked from his reverie over the skies of Yugoslavia when soldiers begin firing surface to air missiles at him. They believe their target to be a communist jet come to attack them. The plane is destroyed, however Tony realises that the Iron Man armor is charged enough to allow him to fly away on his own power. Missiles continue to strike Tony, sending him spiraling out of the sky.

He lands somewhere in the Swiss Alps where soon a group of freakish, diminutive humanoids known as the Children of the Damned stumble upon him. The Children signal their leader to inspect their find. Their leader is none other than Frankenstein's Monster. The Monster hefts the unconscious Iron Man onto his shoulder and brings him back to Castle Frankenstein.

Tony awakens to find the Monster and the Children staring at him in a threatening manner. They liken him to another helmeted individual who has recently sought to take control of the castle. Iron Man begins fighting with the Monster, but his low power levels make the challenge difficult. Ultimately, Tony wins, but before he can figure out anything more about his captors, a bolt of energy strikes down upon him from an outside source. An armored villain known as the Dreadknight arrives riding astride a great, black, winged steed.

Retrieved from "https://heykidscomics.fandom.com/wiki/Iron_Man_Vol_1_101?oldid=1587366"
Community content is available under CC-BY-SA unless otherwise noted.