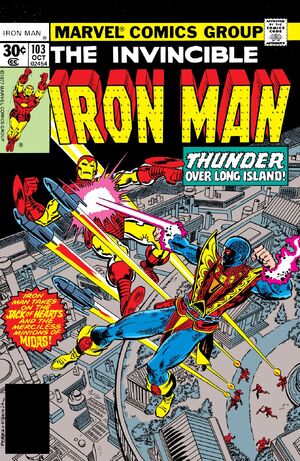 Appearing in "Run for the Money!"Edit

Synopsis for "Run for the Money!"Edit

While Iron Man takes a commercial jet back to the USA, Jasper Sitwell's pursuit of Krissy Longfellow and Harry Key ends when they are taken aboard Mordecai Midas' Flying Fortress. Learning Key failed to obtain Iron Man's armor, Midas throws him from the Fortress to his death. After Krissy reveals herself as Madame Masque, Midas allows her to accompany him to Stark International. When Iron Man approaches, Midas' underlings use Stark defenses to attack. Misunderstanding the situation, Jack of Hearts attacks Iron Man, but their battle becomes moot when Midas reveals himself, declaring he has acquired possession of Stark International, which he renames Midas International. Thunderstruck by this development, Iron Man departs with Madame Masque. Meanwhile, Marianne Rodgers, Stark's telepathic ex-girlfriend, is released from Milford Sanitarium.

Retrieved from "https://heykidscomics.fandom.com/wiki/Iron_Man_Vol_1_103?oldid=1547377"
Community content is available under CC-BY-SA unless otherwise noted.