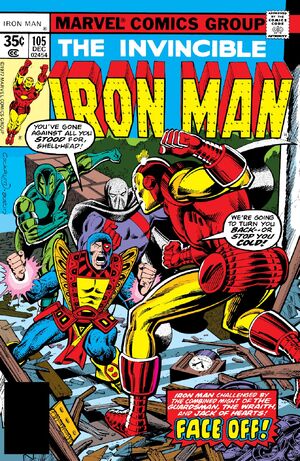 To dad, wealth was everthing... while I never paid much attention to it.

Appearing in "Every Hand Against Him!"Edit

Synopsis for "Every Hand Against Him!"Edit

While Madame Masque consoles Tony Stark over his losses, Jack of Hearts is drawn to a meeting of Nick Fury, Jasper Sitwell, the Guardsman, the Wraith, Jean DeWolff, and Eddie March. Abe Klein, whom Midas extorted into helping blackmail stockholders months before, attempts to reach Stark by phone, but Midas, via his Mechanoids, intervenes. Fury's group confronts Iron Man, demanding Stark show himself to help retake Stark International, which SHIELD considers too valuable to leave to Midas. Sitwell going so far as to threaten Masque's life unless Iron Man comply. Elsewhere, Marianne Rodgers, arriving in Southampton, leaves a train full of insane passengers in her wake.

Retrieved from "https://heykidscomics.fandom.com/wiki/Iron_Man_Vol_1_105?oldid=1435930"
Community content is available under CC-BY-SA unless otherwise noted.