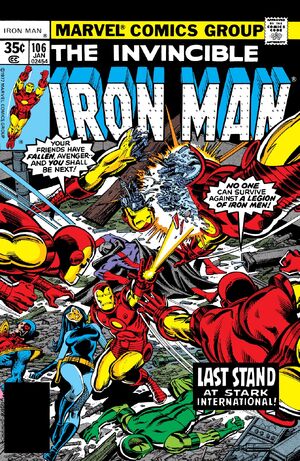 Appearing in "Then There Came a War!"Edit

Synopsis for "Then There Came a War!"Edit

Although having almost concluded Midas' takeover was a blessing that allowed him a more normal life, Iron Man agrees to take back Stark International. Disgusted with Jasper's actions, Jean DeWolff knocks his gun aside from Madame Masque, then Jean, Masque, Wraith, and Eddie join Iron Man attacking Midas' forces, followed soon after by Sitwell in the hover-car. However, Midas' forces, including the Mechanoids, put up a good fight, and soon all but Iron Man are defeated. None notice Marianne Rodgers approaching the factory, herself intent on murdering Iron Man.

Retrieved from "https://heykidscomics.fandom.com/wiki/Iron_Man_Vol_1_106?oldid=1435931"
Community content is available under CC-BY-SA unless otherwise noted.