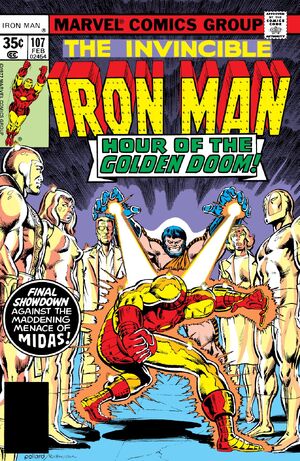 Appearing in "And in the End..."Edit

Synopsis for "And in the End..."Edit

Iron Man defeats the Mechanoids but is confronted by Midas himself, who encases him and his allies in gold with his Abe Klein-designed golden touch. Gloating, Midas, who extorted Abe Klein's cooperation by implying he would reunite him with his lost wife and daughter, callously tells him his family is dead. Jack of Hearts' powers counteract the golden touch. He inadvertently knocks over Iron Man, whose armor only has been transmuted. Tony frees himself: his armor destroyed, he dons replacement components from the Mechanoids. Although Midas quickly defeats Jack, Iron Man puts up a better fight. When Klein rebels, Midas strikes him down with a killing blow. Suddenly Marianne Rodgers interrupts the battle, lashing out at Iron Man with her mental powers, but strikes Midas instead, rendering him comatose. After hearing Klein's dying words, Iron Man escorts Marianne, who has retreated further into madness, from the scene.

Retrieved from "https://heykidscomics.fandom.com/wiki/Iron_Man_Vol_1_107?oldid=1435932"
Community content is available under CC-BY-SA unless otherwise noted.