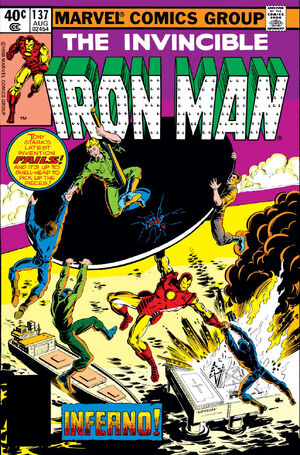 Appearing in "Chapter I: Facades"Edit

Synopsis for "Chapter I: Facades"Edit

Tony throws an employee appreciation party at the plant attracting many of his top staff with Tony appearing as himself and Iron Man during the course the party. Uranus Bliss attends as her sister Bambi Arbogast guest and is outraged to learn that Tony Stark - who had inadvertently bothered her twice before - is Bambi's employer. When the Stark International team at the Baltimore trench prepares to activate the new sonic board drilling rig the device explodes. Tony races to the scene as Iron Man to help contain the damage. Ling McPherson is bodyguarding Harmon Taylor when he leads her into an ambush by a gang who beat her up. Iron Man learns the sonic board failed because someone disguised as Ted Calloway stole the Energizer link. Iron Man tries to capture this spy, but he escapes. As the party at Stark's wraps up, Bethany calls Tony from Mt. Sinai Hospital to inform him of Ling's condition. As they talk, Ling stops breathing on the examination table.