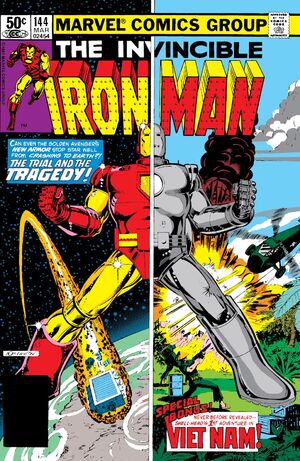 A daydreaming Tony Stark flying to Dallas with his trusted pilot and confindant Jim Rhodes recalls how he first Jim Rhodes in Vietnam. Shortly after donning the Iron Man Armor for the first time, Stark meets and injured Rhodes. Rhodey helps charge Stark's armor with the aid of his damaged helicopter. In return, Stark helps Rhodes escape the Vietcong and return safely to Saigon. Stark offers a position to Rhodes in his company, Stark Interprises. However, Rhodes politely declines at this time citing his need to finish his military tour as well as pursue some other endeavors.

"Apocoplypse Then" was reprinted in Iron Man: Requiem #1

Retrieved from "https://heykidscomics.fandom.com/wiki/Iron_Man_Vol_1_144?oldid=1631144"
Community content is available under CC-BY-SA unless otherwise noted.