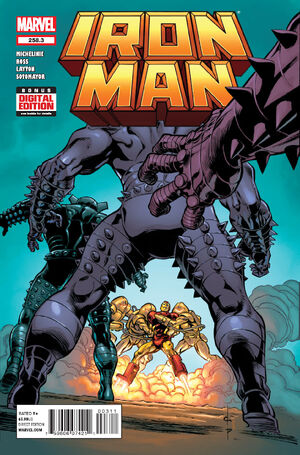 Iron Man flies to Justin Hammer's floating villa to warn him that Tony Stark 2.0 can seize control of technology systems and wants to kill him. Hammer initially fights Iron Man, but then reluctantly agrees to talk. During the conversation, the two are attacked by Mandroids and Dreadnoughts controlled by Stark 2.0. Iron Man urges Hammer to run. Justin Hammer does and soon escapes with a rocket pod into space. No longer fearing for Hammer's safety, Iron Man unleashes his pulse boats and sinks the villa. The Mandroids return to their senses and return to SHIELD. The Dreadnoughts collapse.

Underneath Stark Enterprise, Tony 2.0 has found a snooping Jim Rhodes. 2.0 locks Rhodey into the complex and continues his pursuit of Justin Hammer. Rhodey looks around for something to help him. He finds a prototype of the War Machine armor. He does recall the last time he Wore the Iron Man armor he almost died a grizzly death. After much soul searching, he dons the armor to help his friend Tony, blasts down the door that has imprisoned him, and jets away.

Iron Man has flown into sub-orbit to find Justin Hammer at his floating Space Platform. His oxygen and energy almost depleted, Shellhead urges Hammer to let him into his fortress. Hammer tells him no. Justin Hammer explains that Iron Man has always been a thorn in his side. He leaves the armored Avenger in space to die.

Retrieved from "https://heykidscomics.fandom.com/wiki/Iron_Man_Vol_1_258.3?oldid=1517485"
Community content is available under CC-BY-SA unless otherwise noted.