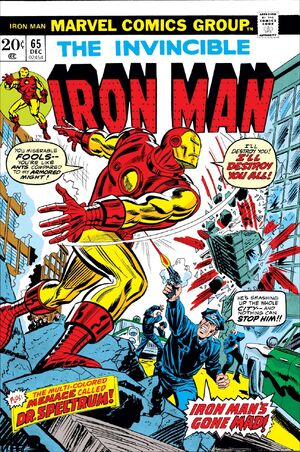 Are you a man, Spectrum? A man who lets an alien rule him?

Appearing in "The Cutting Edge of Death!"Edit

Synopsis for "The Cutting Edge of Death!"Edit

His power weakened, Iron Man fends off Dr. Spectrum. Roxanne flees the scene and meets Eddie March; Eddie hopes to help Iron Man somehow. Happy and Pepper have another confrontation and Happy reveals to her that Tony is Iron Man. In New York, Luke Cage receives a telegram from Obatu asking him to be his bodyguard, but Cage is not interested. As Spectrum nearly has Iron Man beaten he recalls his origins; Iron Man manages to escape him. As Spectrum searches for his foe he finds Iron Man near Roxanne and attacks. Iron Man is swiftly beaten and the Power Prism decides to make Iron Man the new host for its power. Elsewhere, someone phones Avengers Mansion to ask for help; soon enough, the mighty Thor appears to face the possessed Iron Man.

Retrieved from "https://heykidscomics.fandom.com/wiki/Iron_Man_Vol_1_65?oldid=539417"
Community content is available under CC-BY-SA unless otherwise noted.