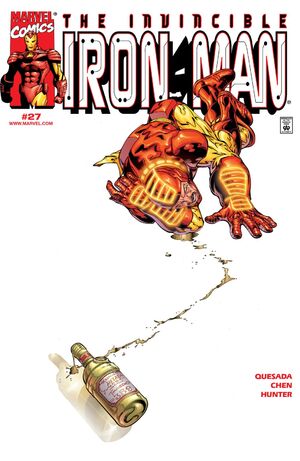 Appearing in "The Dream Machine"Edit

Synopsis for "The Dream Machine"Edit

With Iron Man's identity revealed, his life comes crashing down. He's fired from Stark-Fujikawa, all of Stark Solutions' business dried up for fear of attack by Iron Man's enemies, Stark has to ship all his friends away for their safety, Rumiko finds another man, and he's even thrown out of the Avengers. Tony goes back to drinking and Warbird comes to offer the same help he gave her, but he casts her away. Jocasta then alerts him that all his friends and lovers have been found and killed by Axon-Karr. Suddenly, the Mandarin bursts in and demands a fight. He puts Tony in the armor and humiliates his drunken foe. Tony is able to fight back until his chest begins to burn, and hears a voice asking for help, telling him it's dying. Tony wakes up in the street where he fell, his identity still safe. He takes off, hearing the voice again. He demands the identity of the speaker, and learns it's his armor. He returns home and starts running diagnostics on it; Jocasta informs him the armor appears to have become sentient, but more importantly, she warns him he suffered a heart attack as a result of his fight with Whiplash.

Retrieved from "https://heykidscomics.fandom.com/wiki/Iron_Man_Vol_3_27?oldid=1436200"
Community content is available under CC-BY-SA unless otherwise noted.