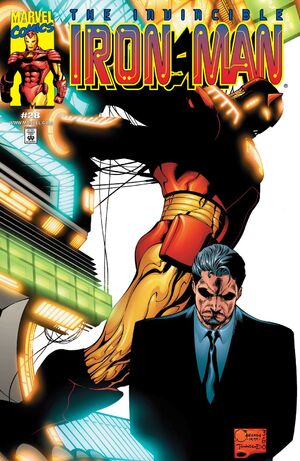 Appearing in "His Own Worst Enemy"Edit

Synopsis for "His Own Worst Enemy"Edit

Tony figures the lightning mixed with the sophistication of his systems and lack of protection against the Y2K bug caused his armor to come alive. Regardless, he feels it must be deactivated, but the armor tries to talk him out of it and into becoming one; a perfect Iron Man. Meanwhile, Pepper and Happy consider working for Tony might not be a good idea, while Rumiko receives some advice to just follow her heart, and Tony decides to accept the armor's proposal. Whiplash ends up finding Iron Man and the armor takes over despite Tony's wishes; it beats Whiplash into naming his employer as Trevor Donahue, then as the mercenary begs for his life, pleading that he was only doing what he needed to in order to get his son back, the armor kills him, and drops his corpse into the sea.

Retrieved from "https://heykidscomics.fandom.com/wiki/Iron_Man_Vol_3_28?oldid=1436201"
Community content is available under CC-BY-SA unless otherwise noted.