Part of the 'The Big Bang Theory' story arc 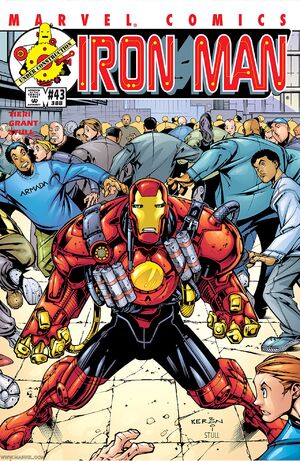 Tony ran out of the Askew Company with his armor slowly ticking down from fifteen minutes. He knew that he had to rush to the Avengers Mansion, take off the armor, and detonate it in the containment field. He ran into Mr. Hyde was sent there to make sure Tony blows up. They fought for a while and Tony managed to outsmart him and beat him down. Tony flew as fast as he could but his thrusters gave up on him and he ended up falling. He had to shove people out of the way to make it to the mansion. Finally, Tony made it to the Avengers Mansion and quickly stripped off his armor and tossed it into the containment field. He ducked and waited. Nothing happened. It turned out to be a ruse to get him away from the Askew Company and the real bomb. The real bomb blew up the company.

Retrieved from "https://heykidscomics.fandom.com/wiki/Iron_Man_Vol_3_43?oldid=1436216"
Community content is available under CC-BY-SA unless otherwise noted.