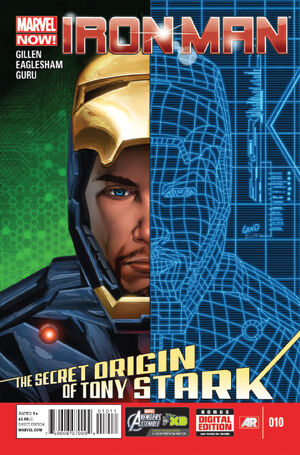 No one is a self-made man.

Appearing in "The Secret Origin of Tony Stark: Part One"Edit

• Many years ago, Howard and Maria Stark had a baby boy. There’s something you don’t know.

• Learn the truth about Las Vegas and Area 51 as the two great myths of Nevada collide.

• The story that will shake Iron Man to his very core starts here!!!

Retrieved from "https://heykidscomics.fandom.com/wiki/Iron_Man_Vol_5_10?oldid=1436307"
Community content is available under CC-BY-SA unless otherwise noted.