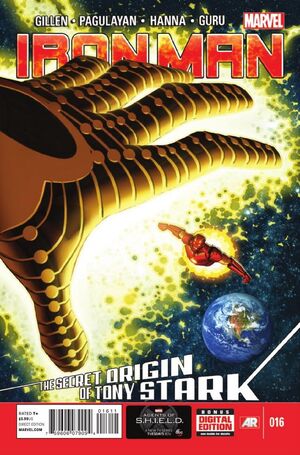 Appearing in "The Secret Origin of Tony Stark: The Best Offense, Part Four"Edit

• An escape from the scene of the crime.

• How is TONY STARK deceiving the GUARDIANS OF THE GALAXY?

• A surprise Tony was trying to avoid...

According to writer Kieron Gillen, Infinity takes place during the 3 month lapse shown in this issue.[1]

Retrieved from "https://heykidscomics.fandom.com/wiki/Iron_Man_Vol_5_16?oldid=1649908"
Community content is available under CC-BY-SA unless otherwise noted.