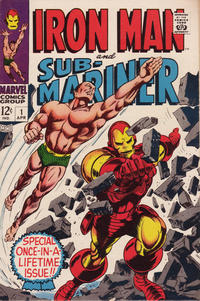 Did you suppose that Namor the First, Prince of Atlantis was some mere human... to be long held at bay by naught save an illusion!?

Appearing in "The Torrent Without -- the Tumult Within"Edit

Synopsis for "The Torrent Without -- the Tumult Within"Edit

Iron Man is magnetically bound to a table in the lower hull of a Maggia gambling ship. An overhead laser beam threatens to slice him in half. He manages to pull a recharge cable from one his side-pods and short circuits the electrical systems operating both the table and the laser.

Simultaneously, agents of A.I.M. board the cruise ship and raid the gambling den. Big M orders Whiplash to deal with them. Avoiding enemy fire, Whiplash manages to keep the A.I.M. agents at bay with his whip. As everything erupts into chaos, Jasper Sitwell dives behind a poker table and tries to stay out of sight. Big M and Whiplash eventually retreat and seal themselves inside of a special chamber.

The A.I.M. submersible activates a weapon that rocks the cruise ship. Whiplash emerges from his vault whereupon he stumbles upon Jasper Sitwell. Iron Man blasts upward through the deck just as Whiplash is preparing to kill Jasper. He lays him out with a repulsor blast, saving Sitwell's life.

Suddenly, the A.I.M. submersible activates a vortex beam that pulls Iron Man out through the hull of the ship and into the water.

This story is continued in Iron Man #1...

Appearing in "Call Him Destiny... or Call Him Death!"Edit

Synopsis for "Call Him Destiny... or Call Him Death!"Edit

Destiny and the Sub-Mariner continue to battle one another in the frozen tundra of Antarctica. Destiny uses his Helmet of Power to hurl sharpened icicle at the Atlantean Prince, but Namor easily deflects them. He then chides Namor, taunting him with the knowledge that he defeated him once before. Namor reasons that this incident must have taken place during the years that he wandered the globe as an amnesiac, but Destiny gives little information in regards to this.

He does reveal however, that he was once a carnival mentalist named "Mentallo". Many decades ago, Paul Destine developed his mild telepathic capabilities and used them for personal gain. In 1920, he felt a strange telepathic summons, beckoning him North.[1]

Destiny met with Leonard McKenzie, captain of the Icebreaker ship Oracle and future father to Prince Namor. He journeyed with him to the frozen North where he eventually discovered ancient technology buried beneath the ice. McKenzie realized Destine planned on using this technology for selfish reasons and sought to stop him, but he was unable to prevent Paul from acquiring the Helmet of Power. With his powers now greatly enhanced, Paul Destine was prepared to fulfill his Destiny.

After taunting Namor some more with the history shared between his father and he, Destiny continues to batter the Sub-Mariner with a barrage of attacks. The icy hills surrounding them begin to give way, and Namor is buried beneath a ton of ice and snow.

This story is continued in Sub-Mariner #1....

Retrieved from "https://heykidscomics.fandom.com/wiki/Iron_Man_and_Sub-Mariner_Vol_1_1?oldid=1528748"
Community content is available under CC-BY-SA unless otherwise noted.