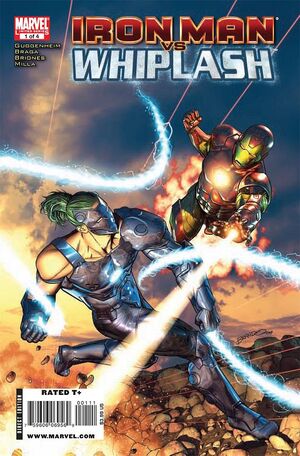 Meet the all-new, all-different, all-deadly WHIPLASH in this special in-continuity lead-in to the Iron Man 2 movie. Who is Anton Vanko and why does he blame Tony Stark for the murder of thousands? For that matter, why does the United Nations? Brannon Bragga (24) and Marc Guggenheim (AMAZING SPIDER-MAN) and artist Phil Briones (SUB-MARINER: REVOLUTION) have the answers!

Retrieved from "https://heykidscomics.fandom.com/wiki/Iron_Man_vs._Whiplash_Vol_1_1?oldid=1651203"
Community content is available under CC-BY-SA unless otherwise noted.