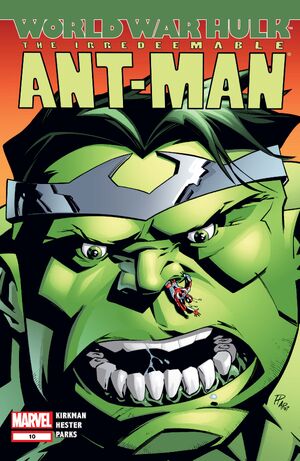 Ant-Man and Damage Control rescue New Yorkers buried beneath rubble in Times Square. Ant-Man is still operating under his dual identity of the Slaying Mantis. The Visioneer stops him and reveals that she knows he is in love with her. Eric is stunned, but there is no debating the Visioneer’s empathic abilities. The tension is broken as Monstro points to a huge warship hovering in the sky. A holographic projects forward revealing the Hulk holding the limp form of Black Bolt. The Hulk gives the people of New York twenty-four hours to evacuate the city, or he else he will destroy it.

As the deadline expires, Ant-Man ventures into the wreckage to "help survivors" (although his true motive is looting). He sneaks upon the Hulk's back and enters his stomach through the mouth. He tries causing as much damage as possible, but his efforts are wasted as he discovers that the Hulk's innards are just as durable as his exterior. He exits through the Hulk's nose just as the mammoth begins fighting with Iron Man. Ant-Man is caught in the carnage and gravely injured. When he awakens, he finds himself in a S.H.I.E.L.D. medical facility with Mitch Carson standing over him.

Retrieved from "https://heykidscomics.fandom.com/wiki/Irredeemable_Ant-Man_Vol_1_10?oldid=1436409"
Community content is available under CC-BY-SA unless otherwise noted.