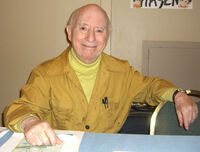 Irwin Hasen started his professional cartooning career in the 1930s after graduating from the National Academy of Design and the Art Students League in New York. He worked on sports and advertising cartoons before moving on to comic books by 1940. After serving in World War II, he returned to working on comic books and comic strips. Most notably, he collaborated with Gus Edson while on a tour of Europe to create the daily comic strip Dondi, which would run in newspapers from 1955 until 1986 when Hasen entered semi-retirement.[1]

Retrieved from "https://heykidscomics.fandom.com/wiki/Irwin_Hasen?oldid=149993"
Community content is available under CC-BY-SA unless otherwise noted.