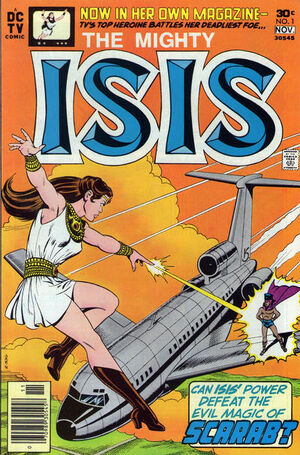 Appearing in "Scarab - The Man Who Would Destroy"Edit

Synopsis for "Scarab - The Man Who Would Destroy"Edit

An ancient Egyptian pyramid is being erected in the town square, as Andrea, Cindy, Rick and Doctor Joshua Barnes, the High School Principal, watch. From the pyramid emerges Scarab, an evil sorcerer who was imprisoned inside. As he uses his magic to capture the others, Andrea transforms herself into The Mighty Isis and saves her friends. Scarab then attacks Isis with a lightning bolt and she deflects it with one of her spells. Scarab takes to the air to get away and Isis follows him. To distract her, Scarab causes an airplane to disintegrate while airborne and Isis has to rescue the passengers. Scarab gets away and Isis returns to the high school to become Andrea.

She is met by Cindy, who asks Andrea about the time she helped in finding a pyramid. Andrea's mind then wanders back to the time she found the amulet that gave her the powers of Isis. As Andrea looks through magic books to find a way to defeat Scarab, he roams the streets. He uses his telepathy to locate Isis but finds Andrea instead. He uses her to set a trap for Isis by creating a magic aura around her that destroys anyone with magical powers. He sets fire to Andrea's house, then flies to the White House to capture the President. Meanwhile, Andrea's pet bird, a crow named Tut, unties the gag in her mouth. Andrea quickly says, "Mighty Isis!" As she is transformed into the Goddess, the aura that surrounded her is destroyed instantly. She commands the fire to go out, then takes to the sky to go after Scarab. On the way to the White House, Isis uses her powers to transport the pyramid to the White House grounds. She creates oak trees to camouflage it. Isis challenges Scarab to face her. As Scarab attacks Isis, she lowers the pyramid and traps him inside. Afterward, Andrea explains to her friends that when Scarab was forced to reenter the pyramid, he would be imprisoned there forever.

Retrieved from "https://heykidscomics.fandom.com/wiki/Isis_Vol_1_1?oldid=1564282"
Community content is available under CC-BY-SA unless otherwise noted.