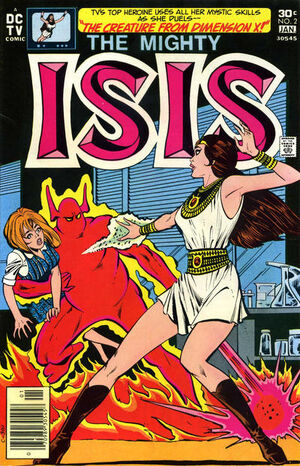 Appearing in "The Creature from Dimension X"Edit

Synopsis for "The Creature from Dimension X"Edit

Two of Rick Mason&#146;s students, Roger and Gini, are working on a project for the school science fair. When they activate the experiment, it produces a black hole hanging in midair. While Roger takes notes on how it happened, Gini goes to tell Rick and Andrea. A creature from another dimension steps out of the black hole. Behind Roger&#146;s back it sneaks out of the room, then blasts an opening in the wall so it can escape.

Hearing the noise, Andrea, Roger and Gini, rush back only to find the hole in the wall and a puzzled Roger wondering what the noise was all about. Andrea sees smoking footprints on the outside and suspects some monster created the hole. She slips outside the building, changes into The Mighty Isis, and takes to the air in search of the creature. When Isis finds it, the creature blasts her out of the sky. Quickly recovering, she commands the water in a nearby fountain to spray the creature. Because it is made of pure electricity, the creature is in pain and it runs back to the high school. The creature returns and leaps back into the black hole as Roger continues with his experiments. Its foot catches part of the machinery and it explodes. Hearing the blast, Isis flies back to the school and takes Roger to the hospital.

Next day, when Gini visits Roger, he tells her about the monster, but Gini refuses to believe him. Later on, Gini recreates the experiment for Rick and more of the creatures appear. Andrea hears the commotion, changes into Isis, and magically activated the school sprinkler system to drive the creatures back to where

Flying over a lake during a thunderstorm, The Mighty Isis rescues two children from their capsized canoe. She brings them back to their worried parents and flies away to change back into Andrea. She goes on to a faculty/student party at the High School.

At the party, Rick and Dr. Barnes tell Andrea about a scavenger hunt that got called off because of the bad weather. Cindy was the only person they couldn't reach. Looking over the hunt checklist, Andrea finds that Cindy was sent to find a sea shell on the shores of the same lake Isis rescued the children from. Sensing danger, Andrea transforms herself into The Mighty Isis while running down the high school corridor. Isis soars like a falcon towards the lake and saves Cindy from being swept over a waterfall.

Retrieved from "https://heykidscomics.fandom.com/wiki/Isis_Vol_1_2?oldid=1564283"
Community content is available under CC-BY-SA unless otherwise noted.