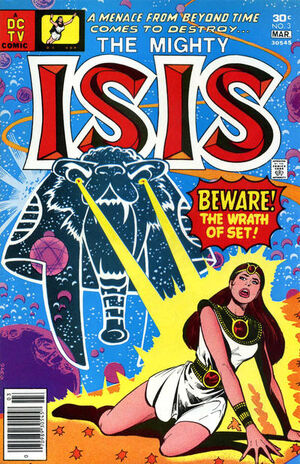 Oh, zephyr winds that blow on high, lift me now, so I might fly!

Appearing in "The Wrath of Set"Edit

Synopsis for "The Wrath of Set"Edit

Andrea Thomas and Cindy Lee are walking back to school. Suddenly, a storm of hail begins falling down upon their heads, despite the fact that it is nearly Summer. They rush back to school, but Andrea is concerned that something nefarious may be responsible for the unexpected weather.

Andrea steps out and transforms into Isis. She flies into the sky and finds Set, the Egyptian God of the Desert. Set declares his intention to wrest control of Isis' worshipers from her, so that they will instead pay homage to him. Isis explains that she does not demand worship from others, and that she only wants to help people. This concept is completely alien to Set and he cannot abide the notion of a humble god. Frustrated, he leaves her presence, vowing to return.

Isis returns to the school and switches back into her Andrea Thomas identity. She goes into class where she confers with Doctor Barnes. During the conversation, a prankish student named Jeffrey Carter tosses a paper airplane, striking Andrea in the head. She dismisses the act, but Barnes feels that she is too easygoing with her students.

During class, Cindy tells Andrea about a radio report concerning a nearby fire. Andrea excuses herself and changes back into Isis. She flies to a burning apartment building, and rescues several children caught in the blaze. Set appears before her, and confesses to perpetuating the fire in order to draw Isis out. He again announces his intention to become the patron deity of Earth, demanding worship from all those around him.

A crowd of students gather on the street to witness Isis’ confrontation with Set. Isis notices Jeffrey Carter amongst the crowd and uses him as a means of offsetting Set's plan. Jeffrey, who apparently enjoys playing pranks on super-heroes as much as he does chemistry teachers, tosses a custard pie in Isis' direction. Isis allows the dessert to hit her squarely in the face, but takes no action afterwards. Set is furious. It is obvious that the people of Earth have no respect for the Gods and he cannot believe Isis would allow herself to be humiliated in such a fashion. He no longer desires to have anything to do with these people and disappears.

Isis is flying through the city when she sees a man named Lattimer falling out of a top-story window. She catches him and brings him safely down to the street. Lattimer explains that he is an ornithologist, who had been birdwatching so intently that he fell out of his window. After telling Lattimer to be more careful, Isis takes her leave of him.

She switches back to her civilian identity and goes to the fundraiser of a local politician named Bob Carver. Andrea is Bob's friend, and she supports his strong anti-crime bill. During the fundraiser, several people including Andrea, begin to lose their voices. She discovers that somebody has poisoned the punch bowl. She races outside and strains her constricting vocal chords to mouth the words, "Oh, Mighty Isis". Switching into her super-hero guise, she swoops back in and finds that the man responsible for spiking the punch is Carver's assistant, Watkins.

Watkins, realizing that he has been exposed, runs out of the building and jumps into his car. Isis follows him and easily stops the fleeing criminal. Lattimer approaches the crime scene and reveals that he is actually an undercover police officer investigating a potential murder attempt against Bob Carver. Thanking Isis for her assistance, he takes Watkins into custody.

Retrieved from "https://heykidscomics.fandom.com/wiki/Isis_Vol_1_3?oldid=1564284"
Community content is available under CC-BY-SA unless otherwise noted.