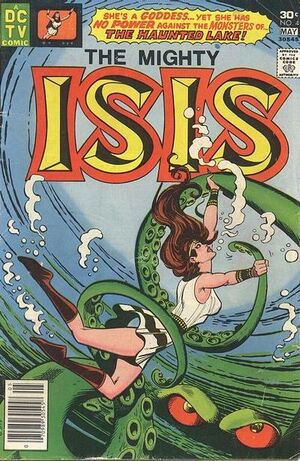 Appearing in "Treasure of Lost Lake"Edit

Synopsis for "Treasure of Lost Lake"Edit

Andrea, Cindy and Rick drive to the Wolfeboro Summer Resort in New Hampshire. They wish to study an ancient legend concerning Iroquois relics supposedly buried in Lake Winnipesaukee. When they arrive at the lake, a large sea monster reaches out and attacks them with its tentacles. Andrea changes into Isis, but her magic doesn't seem to affect the creature. Isis retreats from the scene, and the monster sinks back down beneath the water’s surface. Isis changes back into Andrea Thomas and regroups with Rick and Cindy.

Rick begins investigating the case on his own and finds what appears to be the living spirit of an Iroquois warrior named Mocinnivo. The warrior runs into the lake towards the sea monster, whereupon Rick discovers that the monster is just an elaborately disguised undersea vehicle. The monster grabs Rick with its tentacles and begins drowning him.

Isis arrives and fights back against the monster. With the help of Tut, she eventually disables the craft, and pulls Mocinnivo out from the cockpit. Tugging at his face, they discover that Mocinnivo is actually a lodge owner named Mister Marra, who wanted to horde the legendary treasure for himself. The spirit of the real Mocinnivo appears and thanks Isis and the others for helping preserve his people's heritage.

Andrea Thomas goes skiing in the mountains of New Hampshire. On one of the lifts, she meets a big game hunter named Big Roy, who boasts about all of the elk he plans on hunting in the surrounding area. Andrea doesn’t care for the man’s demeanor and quickly takes her leave of him.

Some time later, Big Roy tracks down an elk and shoots it with his rifle. The echo of the gunshot prompts an avalanche and tons of snow begins rushing down towards the ski resort. Andrea Thomas transforms into Isis and uses her elemental control over the wind to blow several ski lift carriages to safety. She finds that Big Roy is buried beneath some snow and debris, so she flies down to rescue him.

Retrieved from "https://heykidscomics.fandom.com/wiki/Isis_Vol_1_4?oldid=1564285"
Community content is available under CC-BY-SA unless otherwise noted.