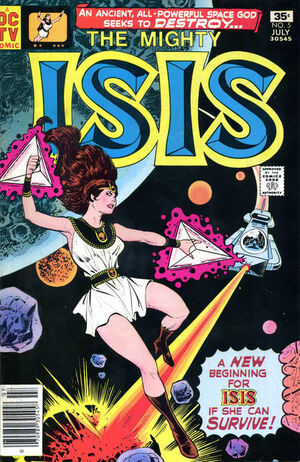 During a class field trip to the observatory, the astronomer spots a UFO in Earth orbit. Andrea slips into another room and becomes the Mighty Isis. When she reaches the alien spacecraft, she finds that the air is too thin, so she cannot utter a spell to stop it. She is stunned by a force beam and plummets back to Earth. She lands near the highway and, unconscious, changes back into Andrea.

As Rick starts to look for her, Andrea awakens and begins to doubt why she has to put up with the pressures of being, "The World's Only Human Goddess". Andrea comes back to her apartment where Rick is waiting for her. When he demands an explanation, she says that where she goes is none of his business. Rick then has to tell her she's been laid off by the school board. After throwing Rick out of the apartment, Andrea decides that this is the last straw and says, "Oh Mighty Isis -- FOREVER!"

The next day, Isis shows up at the high school to take Andrea's place. She is appalled when the students ask her about the secrets of nature and she walks out.

Meanwhile up in orbit, the alien observes Isis as she flies back to Egypt. Isis brings forth her sacred dwelling from its hiding place, near the Great Pyramid at Giza. The alien, having landed nearby, declares that he is Aten, the Sun God of the Egyptian heretic, Akenaten. He tells Isis how thousands of years ago he was forced to land his damaged spacecraft in Egypt. He came to be worshipped by Akenaten and his Queen, Nefertiti. He taught them Astronomy and other sciences. The Egyptians taught him the powers of the Gods and their pyramids. When Akenaten died, Aten knew the people would soon revolt, so he buried a signal device to warn him if the Gods of Egypt returned and left for his home planet. The planet's high council then banished Aten for interfering with Earth's development. Now, to gain revenge on the council, he returns to use the power of the Great Pyramid; the same one that Isis receives her powers.

Isis tells Aten that she would destroy the pyramid before letting him use it, so Aten attacks Isis with a power bolt. She replies with a power bolt of her own, but Aten absorbs it and hurls it back at her. True to her word, Isis then destroys the source of her power, the Great Pyramid. Aten marvels at the Goddess who gave up her powers to stop his plans for revenge and leaves the Earth. Isis smiles a knowing smile, then uses Andrea's knowledge of geometry to magically reshape the pyramid.

Back in the United States, Rick and Cindy discuss Andrea's disappearance and Rick decides to go look for her. However, Andrea Thomas no longer exists. The Mighty Isis has returned -- forever.

Retrieved from "https://heykidscomics.fandom.com/wiki/Isis_Vol_1_5?oldid=1564286"
Community content is available under CC-BY-SA unless otherwise noted.