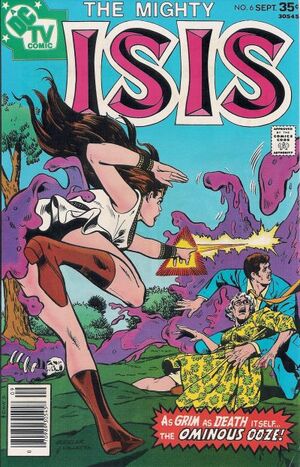 Appearing in "The Ominous Ooze"Edit

Synopsis for "The Ominous Ooze"Edit

A unit of the Egyptian Army is on the march. From the air, the Mighty Isis magically stops their tanks and lands before their commander. She tells him that she will not allow them to take human lives. Suddenly, a purple, malodorous Ooze moves over the desert sands. Isis uses the sand to lift her into the sky as she tries to think of a way to destroy the Ooze. She watches in horror as the Ooze digests a camel. Then, the Ooze disappears, leaving a puzzled Isis to ponder that, since this defies the laws of science, what would Andrea Thomas do in a situation like this.

Back in the United States, Rick begins his search for Andrea and drives to the home of Andrea's mother in Missouri. The target of Rick's search is flying over the trail of destruction left by the Ooze, which ends in an abandoned oil field. She lands and confronts Mister Emal, the creator of the Ooze. He orders his henchmen to release it, but the Ooze machine runs out of its plutonium fuel. They pull out their guns to kill Isis, but the local military General, Abdel, orders them not to. Isis warns that she will keep a close watch on them, then flies away.

Rick arrives in Fairfax, Missouri and meets Viola Thomas, Andrea's mother. He tells her that Andrea is missing and asks where she might be. At the same time, Dr. David Munch, who works for General Abdel, drives to a top secret government research lab to sneak out the fuel for a large scale version of the Ooze machine. Isis locates Abdel and Emal and hitches a ride on their airplane to the USA. In overhearing their plans for their Ooze Machine, she learns that their destination is Fairfax, Missouri, where Andrea's mother lives. Isis leaves the plane and flies to Fairfax.

After landing, Isis changes back into Andrea to explain to her mother that she wants to remain as Isis forever. She spots Rick there and waits for him to go away. In a nearby clearing, Abdel, Emal and Munch start up the full-size Ooze Machine. As it begins to digest the trees and grass in the clearing, the Ooze engulfs the machine and flows out of control. Rick is about to leave when Andrea&#146;s mother spots the approaching Ooze.

Andrea becomes The Mighty Isis and takes to the air. She tries to destroy the Ooze by removing the ground moisture and by using Solar heat, but to no avail. The Ooze now catches up with its creators. Isis tries to rescue them, but arrives too late. Now it goes after Rick and Mrs. Thomas. As Isis rescues them, she realizes that the Ooze feeds on organic matter. Remove it and the Ooze should die. As Isis separates the ground, the Ooze digests the remaining matter on it and dies. After Isis replaces the ground, Rick asks her why she just happens to be in Missouri. When she replies that she is where she is needed, Rick demands that she explain the connection between her and Andrea. Andrea's mother asks Isis if she knows where her daughter is. She replies, "I cannot tell you the location of your child". As she takes to the air, Rick begins to wonder if Isis has kidnapped Andrea.

Retrieved from "https://heykidscomics.fandom.com/wiki/Isis_Vol_1_6?oldid=1564281"
Community content is available under CC-BY-SA unless otherwise noted.