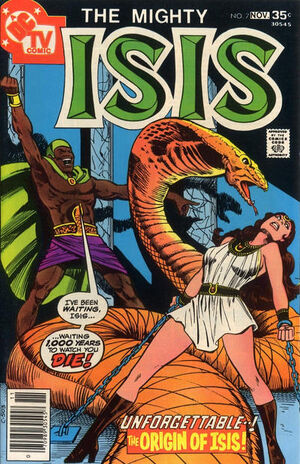 Appearing in "Feel the Fangs of the Serpent King"Edit

Synopsis for "Feel the Fangs of the Serpent King"Edit

As The Mighty Isis soars skyward, Rick wonders if she has kidnapped Andrea Thomas. Isis wishes that she could tell them that she and Andrea Thomas are one and the same. However, the magic of the transformation prevents them from realizing this. As Isis repairs the forest damage caused by the Ooze, park rangers ask her to improve it still further. Isis replies arrogantly, "Silence! I only mend what was undone by unnatural means! I can do no more!"

Rick goes to a nearby museum to learn about Isis and how she came to be. By coincidence she is flying above the museum, also wondering about her roots. Rick deciphers a papyrus about an evil magician named Serpenotep, who ruled with an iron hand and had imprisoned the sorcerer that had protected the people. A servant girl named Isis slips past the guards and tries to rescue him. The sorcerer tells her that he cannot be freed until Serpenotep is captured. He transfers a portion of his power to her. He says, "You shall have the powers of the Pyramid -- You will soar as the falcon soars, run with the speed of gazelles and command the Elements of Earth and Sky!". With the sorcerers help, the Mighty Isis defeats Serpenotep and imprisons him in stone.

At the end of the papyrus is a warning not to speak the forbidden words written at the bottom. As Rick reads, he doesn't notice that a small pyramid with the face of Serpenotep etched upon it stands nearby. Rick then speaks the words, wondering what harm they can do. Serpenotep and Rick magically switch places. As Serpenotep is freed, he gains the modern scientific knowledge of Rick Mason. He uses his magic to locate Isis. To test her power, he causes a cornice to fall off the museum building. Isis prevents it from crushing a young couple walking by. As they thank her, Isis again finds herself talking down to them. Satisfied that she is truly Isis, Serpenotep then magically disguises himself as Rick Mason.

Meanwhile, Isis is sitting on a rooftop, trying to gather her thoughts. She is met by a young girl named Corey, who asks Isis why she's there. she tells Corey, &#147;You have the one thing I thought I did not need any longer. You have your identity.&#148; Suddenly, Corey is transformed into a serpent and it begins to crush Isis. She changes Corey back to normal and takes to the air, hearing horrified screams from down below. The people are also being changed into serpents. When Isis restores one person, another is transformed. They lead Isis back to the museum, where Serpenotep stands at the entrance. She does not recognize him at first, but the Spirit of the original Isis speaks to her from across the millennia and she learns who she really is. Isis now recognizes Sepenotep and attacks. He tells her that only the power of the ancient wizard combined with hers can defeat him. Isis runs past him and reaches the pyramid that was Serpenotep's prison. She becomes trapped in a sarcophagus made of plastic, a man-made substance that is immune to her power. Serpenotep is about to destroy his prison, when Isis magically compresses the air within the sarcophagus and shatters it. She now uses all of her power to destroy him. When the smoke clears, Serpenotep again takes on the form of Rick Mason. Isis does not see through the disguise and leads him out of the museum, leaving the real Rick Mason trapped inside the pyramid.

Retrieved from "https://heykidscomics.fandom.com/wiki/Isis_Vol_1_7?oldid=1564279"
Community content is available under CC-BY-SA unless otherwise noted.