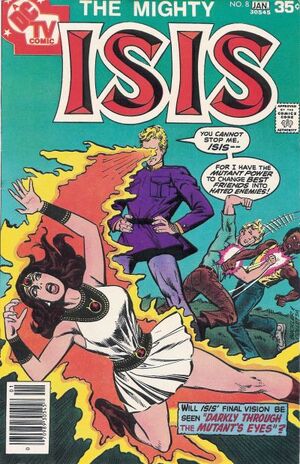 Powers of ancient time and space, put Andrea Thomas in my place!

Appearing in "Darkly Through the Mutant's Eyes"Edit

Synopsis for "Darkly Through the Mutant's Eyes"Edit

Carrying Rick Mason in her arms, the Mighty Isis flies over the city, relieved to have learned the truth about herself. Unknown to her, the man she is carrying is not Rick, but the evil Egyptian sorcerer, Serpenotep, in disguise. Isis lands with "Rick" at the home of Andrea's mother. Isis tells her that she has found Andrea and will send her back. As she says, "Zephyr winds that blow on high, lift me up so I can fly", and becomes airborne, she wonders why "Rick" seems so depressed. She lands and says, "Powers of ancient time and space, put Andrea Thomas in my place!" Later, Andrea reunites with her mother and "Rick".

A week later, back at high school, a government agent briefs Joshua Barnes on the enrollment of Prince Michael of Cornovia as a student. As the King and Queen leave Michael at the school, they remove lead-lined caps from their heads and depart. Doctor Barnes takes Michael on a tour of the school and introduces him to Cindy and her fellow Junior Class Officers, Roger, Paul and Rennie. As Doctor Barnes leaves, Michael calls him a doddering fool, which the kids resent. All of a sudden, Roger elbows Paul in the ribs for no reason and they begin to fight. At the same moment, the Mighty Isis soars over the school grounds. As Cindy tries to break it up, Isis uses her magic to soften the ground beneath them to stop the fight.

Meanwhile, still disguised as Rick, Serpenotep observes that Michael started the fight by a simple gaze and that he must have psychic powers. He starts to think about how he could have Michael's power for his own uses, when he is interrupted by Andrea. She has gotten her job back.

The next day, Andrea apologizes to the class for having left early last term. Michael demands to know when she'll stop talking and start teaching. Steve, a football player, threatens him, but he uses his power to knock Steve down and forces him to "invite" Michael to join the football team. At the football game, Michael telepathically causes the opposing team to fall away from him and scores seven touchdowns. The resulting publicity causes the King to hire some thugs to kidnap his son.

The next day, a car pulls in front of the school and does just that. "Rick" witnesses the act and, not wanting to throw off his disguise just yet, rushes to Doctor Barnes' office, where Andrea is with him. After "Rick" describes what happened, Doctor Barnes calls the State Department and is told there is no exchange student from Cornovia. He then tries to call the Cornovian embassy, but the operator tells him there is no such country as Cornovia. Andrea rushes outside to a secluded spot. Once more she speaks the mystic phrase, "Mighty Isis", and is transformed into the Goddess. As she spots the kidnappers from the air, she is contacted mentally by Michael. He tells her he really is a prince and that he took over his father's kingdom at the age of 5. His uncle, the Duke, created the lead shields to block their thoughts. They brought him to America to hide him, while they plotted the overthrow of his forces. The car then stops and Michael is brought out. Isis descends from the sky. When the kidnappers try to shoot her down, she commands the bullets to turn around. The kidnappers run into each other, trying to get out of the way. The King and Queen emerge from hiding and threaten their son. Michael uses his power to knock them down. He tells Isis that in his short stay in America, he learned that his father is a tyrant, and that he must contain his evil or it would spread. Then, as Isis watches, Michael takes his parents to another dimension.

Retrieved from "https://heykidscomics.fandom.com/wiki/Isis_Vol_1_8?oldid=1564278"
Community content is available under CC-BY-SA unless otherwise noted.