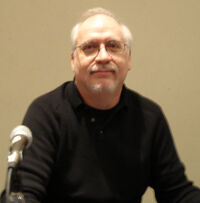 Joseph Michael Straczynski is an award-winning American writer/producer of television series, novels, short stories, comic books, and radio dramas. He is also a playwright, journalist and author of a well-regarded tome on scriptwriting. He was the creator, executive producer and head writer for the science fiction TV series Babylon 5 and its spin-off Crusade. Straczynski wrote most of the Babylon 5 episodes, notably an unbroken 59-episode run including all of the third and fourth seasons.

Straczynski has long been a comic aficionado, and wrote a few comics during the 1980s, namely an issue of Teen Titans Spotlight, The Twilight Zone, and Star Trek. With the exception of the Babylon 5 comics, television work took over most of his writing duties throughout the 1980s and 1990s, until 1999 when he started writing Rising Stars for Top Cow/Image Comics. Eventually he worked mostly under his own imprint, Joe's Comics, for which he also wrote the acclaimed Midnight Nation miniseries, and the illustrated fantasy parable Delicate Creatures.

Soon, Straczynski developed a good reputation in the comics industry, and Marvel Comics signed him to an exclusive contract, beginning with a run on The Amazing Spider-Man, Marvel's flagship title. Other successful titles for Marvel followed, including Supreme Power and a run on Fantastic Four.

Straczynski's run on Amazing Spider-Man has included several controversial retcons, such as suggesting that Spider-Man's powers may be mystical/totemic instead of science-based.

Other notable stories include ASM #36 (477) where Spider-Man comments on the September 11, 2001 attacks on the World Trade Center, ASM #38 where Aunt May learns about Peter's secret identity once and for all, and ASM #509-514, an extremely controversial story-arc. In it, Spider-Man deals with the memory and past actions of his dead girlfriend Gwen Stacy, including the discovery of her having given birth to Norman Osborn's children.

Retrieved from "https://heykidscomics.fandom.com/wiki/J._Michael_Straczynski?oldid=1481402"
Community content is available under CC-BY-SA unless otherwise noted.