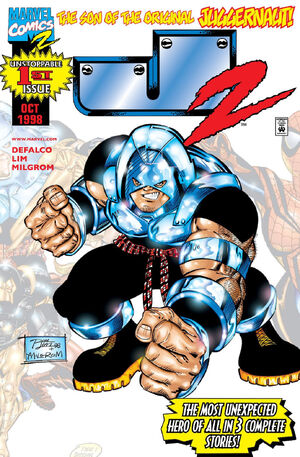 Appearing in "Call the Kid...J2! / Decisions, Decisions! / Rocked by Rollerblast!"Edit

Synopsis for "Call the Kid...J2! / Decisions, Decisions! / Rocked by Rollerblast!"Edit

This first issue is about the origin of Juggernaut's son, Zana Yama. It is broken up into three shorter stories. The first one shows why he became J2. The second is a short one about how he created his costume and gave himself the name J2. The third and final story is about Zane's first official battle with a super villain.

This first story begins with Zane having the nightmare he has had since he was young, which is being chased by a "big, mean unstoppable" monster. The next morning, his mother, Assistant District Attorney Sachi Zama, reassures her son that his father, Cain Marko, won't be coming back to Earth anytime soon. Zane narrates that his mother had met Cain before he became the Juggernaut, but afterwards reverted back to her maiden name of Yama. He tries to impress the beautiful girl Talia Zamora, but strikes out when he thinks their math homework would be a good topic of conversation. The jocks Curtis and Miller make fun of Zane, but the enigmatic tomboyish Montana yells at them about how Zane is going to surpass them by so much once high school is over. Upset by her intrusion, Miller later threatens Zane and follows him all day in the school. When the final bell rings, Miller hunts down Zane like a cat and mouse. Zane unexpectedly gets a wicked headache though and is somehow transformed into a hulking man that is a shadow of his former body. Visibly upset, Zane stampedes (naked) through and out of the school, stopping momentarily only to smash Miller's motorcycle. The story ends up Zane huddled in an alley corner, calming down. When he does so, he reverts to his normal state for reasons he doesn't understand.

This second story is short and sweet. It shows Zane going through the motions of trying to find a suitable costume to wear when he is transformed. He first tries to sew something, like Spider-Man did, but fails. He then goes to the local costume shop, but all they have is the more popular heroes and nothing on the original Juggernaut. He even tries a big and tall store, but doesn't find what he is looking for. In the basement of his house, however, he finds some memento's that his mother kept from his father. Using silver spray paint on select pieces of Juggernaut armor and tying a flannel shirt around his waist, Zane official gives himself the name J2.

Zane is at the amusement park with Montana, hoping to be able to talk to Talia. Miller is also there and becomes agitated when Curtis tries to convince him Zane was talking with Talia. Before Miller can do anything, the purple costumed thief Rollerblast and his cohorts announce that they are robbing the park and everyone inside. Changing into J2, Zane defends Montana, who was being accosted by the men. He and Rollerblast face off until Rollerblast starts to try to make a break for it. It is then that Zane throws something in his path that he can't avoid and goes flying. When Zane reverts back, he is bewildered to see everyone is congratulating Miller for helping J2 take down Rollerblast. The story and issue ends with the X-People, lead by Jubilee, forming in order to investigate rumors that the Juggernaut had returned.

Retrieved from "https://heykidscomics.fandom.com/wiki/J2_Vol_1_1?oldid=1523745"
Community content is available under CC-BY-SA unless otherwise noted.