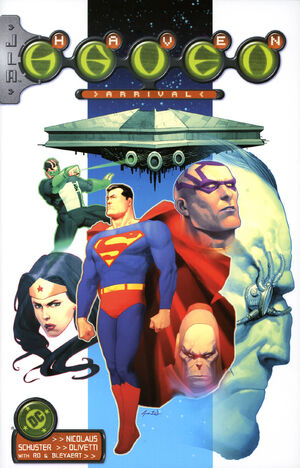 In the early morning hours Lamont, California is virtually destroyed when the giant spacecraft Haven crashes into it. One of Haven's occupants immediately launches into action to save the Haven and muses silently about how Anathema will not succeed in destroying the city as she succeeded in killing his family. His thoughts are ended when the ship cuts him to pieces as he tries to stop it from crashing.

The Martian Manhunter telepathically converses with Flash as the speedster heads into Wasco, California. The two talk about the fact that another giant, alien ship has crashed to Earth without them having any early warning. As Flash skids to a halt another member of the Alliance (a team of super-power heroes from Haven) uses his ability to split into duplicates of himself to gather the populace together as Haven continues to crash.

Flash continues to evacuate Wasco and is joined by several other members of the Alliance who give him assistance. After the citizens are safe Flash attempts to halt the crash by stealing the speed from the ship as it continues to fall. He fails and is about to be crushed when the Alliance member who can divide himself saves him. The Flash brushes himself off as Superman, Martian Manhunter, Plastic Man, Wonder Woman and Green Lantern arrive on the scene. The Manhunter asks Flash if he has made contact with any of the natives of the ship. The Flash replies that he has and despite the fact that he can't understand a word of what they are saying he owes one of them his life.

Meanwhile, General Eugene Norville briefs President Lex Luthor on the situation. He informs the President that the ship began its descent around three A.M. and with its sudden appearance it was traveling at unheard of speeds. The surveillance of the craft suggests that there is a city within and that it will crash into the Pacific Ocean within two hours with casualties in the hundreds of thousands. He goes on to explain that further surveillance has noted that some of the inhabitants have metahuman abilities and that the Justice League has offered its services in helping to stop the crash.

Luthor thanks Norville and opens the floor for suggestions before he has to give a press conference. Nicole Stein, an ambassador to extraterrestrial interests, begins by proposing that the situation is obviously a planned invasion gone wrong and that once the ship crashes they should "neutralize" it. Norville disagrees countering that since the surveillance has taken pictures of children inside the vessel that it is obviously not an invasion fleet. The two argue the point until Luthor says that he has heard enough. He announces that Norville is to call in ground troops and offer humanitarian aid. This upsets Stein and Luthor tells her that he has no intention of nuking a distressed trans-galactic no matter where it came from. He then appoints her to the post of Ambassador to Extraterrestrial Interests.

In Haven, Siv attempts to fix the engines when Valadin and other members of the Alliance ask him what's going on. He informs them that the warp-engine is offline, the atmosphere bubble is off-job, and etc. He tells them to save the people while he tries to fix the engines. After they leave he gets to work but something goes wrong and there is an explosion. Only Siv's energy bubble saves him while the other workers die.

Elsewhere in the city a woman uses telekinesis to save her family. As they get to their feet they notice the Alliance flying overhead and one of them cries that they are saved.

Siv contacts Valadin to tell him about the explosion and instructs him to use his powers to scan ahead of the city. He does and sees another Earth city. Siv says that he thought as much and that they have two minutes until impact. Valadin tells his comrades that there is a change of plans. The group goes into action and they make a valiant effort to stop the city from crashing using the plan that they thought they would never have to use.

One of the Alliance members searches for Omat and Flurr when he discovers that two of the prisoners have escaped. The revelation is short as the escaped criminals, Ivas and Nodecaum, kill him. The two argue about what to do next with Ivas pointing out that Nodecaum's plans are too shortsighted and Nodecaum runs off. Ivas takes stock of where he is, somewhat surprised that they actually managed to move the city as another citizen runs to him to ask for help. He fries the woman where she stands and escapes.

Siv radios Valadin for a status report. Valadin tells him things are a bit tight and that Siv should get back to him. Siv informs him that he is almost to the control room before Valadin says that he has to go. Siv gets to the control room where four beings in tubes are "working."

Outside the Justice League does its best to help the citizens of Haven. The Martian Manhunter asks Green Lantern how things are going and as he answers Lantern watches as a sinkhole opens on the street below. Lantern tells Manhunter that he can't leave them and flies in to help.

Outside, the other members of the League regroup with Superman holding a small child. Manhunter briefs the team by telling him that the evacuation was successful and that the military has already evacuated the nearby town. Superman begins to say that only one problem remains and Wonder Woman completes his thought by saying the ocean. Superman asks the Manhunter if he has had any luck in communicating with the aliens to which the Manhunter replies no. Wonder Woman points out that she has noticed some of the inhabitants wearing distinct costumes. Superman agrees, adding that he also noticed a large number of them having super-human abilities. Before they can talk further the mother of the child Superman was holding appears and the two are reunited. Wonder Woman asks the Manhunter if he can use his telepathy to learn the language. He replies that he would need another telepath for that but he has senses an extremely open mind on board.

Meanwhile Green Lantern is rocked back by an explosion. Before he can help, the Alliance launches into action. He echoes Superman's statements about the fact that some of the inhabitants have super-human powers.

Elsewhere in the city a woman named Nia and her husband Cohvan attempt to flee from the destruction. The ground breaks apart and before she can save him Nia's husband falls to his death. Nia freezes in shock not noticing the building that is about to fall on her. An Alliance member saves her and she immediately begins yelling that he should have left her there. Before he can try and change her mind a group of thugs appear and kill him. They try to do the same to Nia but she fights back, which sends them running.

Haven continues to crash, as Superman, Valadin and others do their best to stop it while others continue to help the populace. Siv finally throws a switch to activate the thrusters. They fire, but the room Siv is in explodes. After getting to his feet Siv finally hooks himself into the ship to use his own energy to save Haven.

Outside Green Lantern joins Valadin on one side while Superman and Wonder Woman try to stop the ship from another. Finally the ship comes to a halt on the remains of Coast City, narrowly missing the Coast City Memorial. Green Lantern watches as Valadin passes out and thinks the hero dead. Superman tells Lantern that the alien is just unconscious. Before the heroes can do anything else more aliens, who tell them to drop Valadin because he is theirs, confront them.

Retrieved from "https://heykidscomics.fandom.com/wiki/JLA/Haven:_Arrival_Vol_1_1?oldid=1713639"
Community content is available under CC-BY-SA unless otherwise noted.