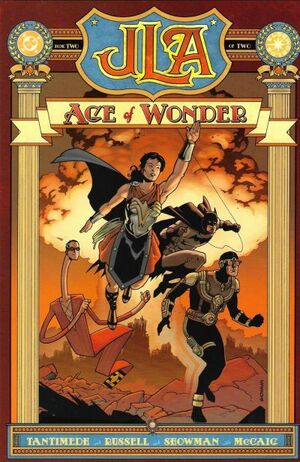 It is 1911 as America became the most technological civilization on Earth as World War One broke out years earlier than in the actual timeline.

In the New Jersey docklands, Green Arrow chases two banker robbers to a working warehouse facility. In the struggle, one of the crooks accidentally shoot the building's machines and tanks, spilling a chemical fluid that inadvertently cause a huge explosion destroying the building and killing everyone inside including Green Arrow. From the rubble, a woman, one of the facility's scientists, emerges unharm and flew away while being watched entirely by an alcoholic.

The League of Science, which consists of new members Plastic Man and Ray Palmer, investigate the scene of the explosion. Palmer discover that there are traces of modified fossil fuel explaining the explosion's potential. They are met personally by the Bat-Man, widely thought to be an urban myth, who tells them of Green Arrow's death and the cause of the explosion. He points out the mystery of the warehouse's purpose for the fuel and suggest of finding the woman who flew away, according to the alcoholic whose claims were initially dismissed, may hold the key to the mystery.

Meanwhile, Lex Luthor, now the United States' Secretary of Defense, is anger in finding out the warehouse's destruction, which is owned by him, and wants his informant to replace the fuels and cover-up any leads to him. After this, Lex enters to a room and talks to the woman who escaped the explosion, reveal to be Diana of Paradise Island. Diana is dismayed in not rescuing the people from the warehouse, but Luthor assure her that the important thing is having her alive and that the "project" is still on course. Also, he promise Diana that her mother and her Amazon sisters will be free.

At the Batcave, Bruce Wayne has been up all night in researching the warehouse and the person who is responsible for Green Arrow's death. Given that the warehouse contains an unusual amount of fuel explosive, and discovering that the building was a holding to of the Luthor Company, Bruce concludes that Lex is up to something.

In New York City, the League attends a charity event concerning the war in Europe and hearing Diana's plight and the Amazons' enslavement by Germany for their island's resources and thanking America's role in supporting Themyscira. Lois Lane interviews with the President and Luthor about America's neutrality in the conflict, which the later vocally supports the nation's intervention (though expressing that it would provide economic wealth). Also she interviews now General Hal Jordan who plans on serving as a military advisor for the British in Europe. Diana and Bruce dances together which Bruce learns from the Amazon princess that she continues to work for Luthor due to the fact that his spending on new innovations would help beat the Germans. Later, Diana demonstrate her powers with Ted Knight's cosmic rod which Bruce learns of her invulnerability.

Sometime later, Hal Jordan oversee the British's failing offensive against the Germans in the Eastern Front as the Germans possess advance weaponry such as giant tanks. This discovery surprises Hal as America was suppose to be the only advanced nation to possess these kinds of weapons and learns some suspicion that someone is supplying these weapons to Germany. Seeing the British forces are being slaughtered in a hopeless fight, Hal joins in the battle. The Germans in response send out their aerial force of anti-gravity power armor soldiers against the Green Lantern. Surprisingly, Jordan discover that they know his weakness as the power armor soldiers are coated in yellow paint. Despite this, Hal uses the terrain and destroyed German tanks to defeat the soldiers.

Recalled back to the United States, Luthor converse with Jordan over the problem that their government could court-martial Hal for breaking America's neutrality. But, Hal is more concern that the Germans were able to possess technology such as anti-gravity armors that only America possesses and that they know his weakness which only himself and Luthor know. Hal then immediately realizes that Luthor was the one supplying the Germans with the technology. Luthor nonchalantly reply to Hal's revelation that it is going according to his plan for his and Tesla's construction of the Death Ray which would ensure America's supremacy and as well providing him the chance of becoming President of the nation. Suddenly they are channel-called from Lex's monitor that something has happened in London; once viewing the footage, Lex and Jordan discover that Germany have bombed the city with a nuclear rocket killing 200,000 people including the destruction of the nation's government and the Royal Family, all in response to the Green Lantern's interference. Hal is shocked but Lex is unsympathetic as he provided Germany with the rockets and the nuclear supply, which he still consider to be according to his plan "very well." Anger in discovering Lex's intentions and what he had planned for London, Hal attacks him. As he is about to kill Lex, Diana stops him. But blind with rage, Hal suspects Diana to be in league with Lex's intentions strangle her with his power ring. Luthor then fatally axed Hal from behind with a fire axe. As he is dying, Hal commands the ring to find Super Man which it flew out escaping from Lex's or his men's reach.

Somewhere in deep space, Clark has been living for years on a livable asteroid satellite and finds Hal's Lantern Ring landing in his palm.

Back on Earth, America have declare war on Germany for their possession of a atomic bomb and that the League of Science have been sent to Britain to provide human relief efforts for the London survivors...

In England, the League discover deep feeling of hopelessness due to numbers of deaths and the English completely lost their morale as their country's Royal Family and government are dead, and that the League have sworn to never involve in armed conflicts as Lois Lane express her view that the inventions that were made for the last decades only bring destruction in the end. The League then notice a green streak of light that fell a distance away. They and Lois approach where it crash and find it is Clark wielding the power ring.

Meanwhile in America, Bat-Man has been interrogating a runner who has been delivering engine parts and rocket fuel for the warehouse that was destroyed, and wanting to know who their boss is. The runner could only answer to his interrogations that the "Amazon princess" knows.

Back in England, Clark fully dress in his costume prepares with the other Leaguers to stop the Germans from launching their nuclear missiles before having a passionate kiss and farewell from his wife.

Later, Luthor is awaken and alarmingly learns that Super Man has return and concludes that he intends to find the rockets. He then prepares to meet with Nikola Tesla and finding a guilt-ridden Diana refusing to go with him because of her indirect involvement for London's destruction. After Lex left for Wardenclyffe, Diana is met by the Bat-Man. From his zeppelin, Lex contacts Germany's War Marshal Bismarck to launch the missiles in three hours as part of his plan for both America and Germany to share the outcome of the war.

Back at Lex's building, Diana reveal everything to Bat-Man about Lex's overall plans of letting Germany to attack America in so allowing Tesla's Death Ray as a curve to counter back and allowing Lex's ascension to presidency. Batman talks her into leading him to the Death Ray and strongly recommend her that it is time to redeem herself.

Having arrive at Wardenclyffe, Luthor is pleased to find the Death Ray is in full operation and strongly tells Tesla to leave. But, the scientist insists on staying and seeing his work in action which Lex reluctantly accepts, but warns him not to tell anyone what he will see.

In Germany, the League finds the rocket base and attack. Two of the rockets are launch allowing Super Man to solely follow them. The other Leaguers successfully disable the other rockets. Afterwards, the team captures the base's leader with Ted Knight recommending him to tell the Kaiser that the war is over.

Back at Wardenclyffe, Lex has the Death Ray charged and ready to destroy the incoming rockets. Outside, Diana and Bat-Man beat the facility's guards. The two storm inside and tells Luthor that he is arrested on orders from the President; Lex, however, tells the two that if he is stop he will not be able input the code for the Death Ray to destroy the missiles.

Hundreds of miles off of New York state, Super Man heads for the rockets and finds one of them heads off course towards New York City. At Wardenclyffe Lex gives the order to shoot the missile, but is then informed that it is slowing down... Over the city, Super Man stops the missile with his power ring and redirect it to explode into space.

Lex have the other missile destroyed and then discovering Super Man. Luthor then have the Death Ray hit Super Man. Although, Super Man fights back the Death beam, forcing Luthor to demand more power for the weapon. Diana and Bat-Man fights Lex's soldiers. Lex then discover that the generators are going to explode. Diana have Tesla and the other people to evacuate the building. Seeing that there is nothing to stop the Death Ray's explosion, Diana willingly allow herself to destroy the overcharged Death Ray causing a magnificent explosion which engulf her. Super Man quickly arrives and provide everyone to safely escape the crumbling Death Ray. After this, Bat-Man and Super Man search for Diana and only find her lifeless body.

Weeks later, Luthor is imprisoned and awaits his death sentence. He is visited by Super Man who wants answer as to why he do it. Lex simply reply that he wants to be remember in history and leave a significant mark on the world. Though in the end he is vilified for being a traitor and a mass murderer, which Lex considers it was worth it. Hearing enough of Luthor, Super Man leaves as Lex cries out of what he will do with the power ring as it is still consider to be the most powerful weapon on Earth.

Years later in 1913, Super Man and the League gathers in a world meeting of every representatives of their respective nation. The Man of Steel gives a speech to prevent future wars and devastation, and recall what Green Arrow had question him before in their first encounter concerning "who will stand for justice?" Super Man conclude of creating a Justice League of Nations, a neutral place where countries could settle their dispute diplomatically rather than on the battlefield. And to ensure the League's trust, he places his power ring inside a Green Lantern to be use by the League to stop any nation from committing an act of aggression against another.

After the inauguration of the Justice League of Nations, Super Man flies away with Lois Lane to catch up on their relationship as Bat-Man watches them and descend into the city's alleyways.

Retrieved from "https://heykidscomics.fandom.com/wiki/JLA:_Age_of_Wonder_Vol_1_2?oldid=1437068"
Community content is available under CC-BY-SA unless otherwise noted.