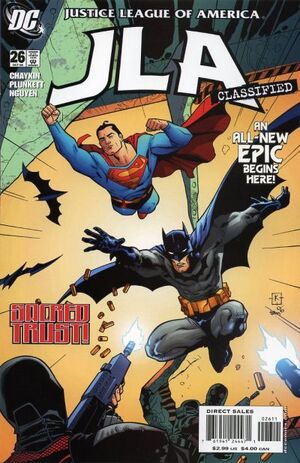 Appearing in "Secret History, Sacred Trust (Part I of VI)"Edit

Synopsis for "Secret History, Sacred Trust (Part I of VI)"Edit

Members of the Justice League of America discuss the South American nations of Santa Bertriza and Del Canto, both of which appear to have begun using Metahumans to quell political dissent. At the Watchtower, the League talks about what it should do about these countries, and the possilily of international terrorism. Aquaman is the most vocal about respecting the sovereignty of the two nations, but the rest of the League agree that something must be done.

They meet with the President, who had already been appraised of the situation by Faith. He supports the League, but Aquaman insists they go first to the United Nations.

The United Nations, after the President's case, refuses to allow the Justice League to interfere. Consequently, the Leaguers decide to go to South America anyways, but they do so without their super-hero costumes.

Retrieved from "https://heykidscomics.fandom.com/wiki/JLA_Classified_Vol_1_26?oldid=1436872"
Community content is available under CC-BY-SA unless otherwise noted.