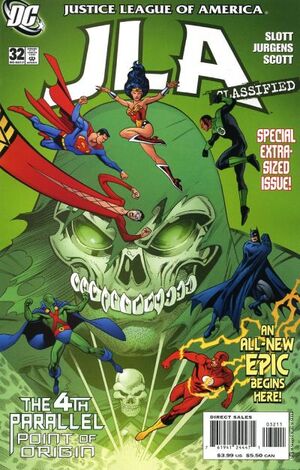 Appearing in "The 4th Parallel: Point of Origin"Edit

Synopsis for "The 4th Parallel: Point of Origin"Edit

Darrin Profitt was just another average man who, along with six and a half billion other people, became part of Doctor Destiny's latest attempt to take over the world. After the Justice League defeats Destiny, his damaged Materioptikon lands near Profitt and somehow it comes with him back into the real world.

After studying it for a time Profitt becomes drawn into the jewel and watches as Doctor Destiny tries to repair the Materioptikon. An offhand comment by Destiny prompts Profitt to take control of the jewel and use it's abilities to explore a seemingly infinite number of scenarios for personal gain. After going through an endless number of possibilities Darrin finally achieves everything he thought he wanted, but soon realizes it is not enough. At Destiny's prodding Darrin focuses his energies on defeating the Justice League and ruling the world. With only three timelines left to him Darrin crafts the world's most powerful armor any reality has ever seen, takes the name Red King and sets out on his quest for world domination.

Retrieved from "https://heykidscomics.fandom.com/wiki/JLA_Classified_Vol_1_32?oldid=1436878"
Community content is available under CC-BY-SA unless otherwise noted.