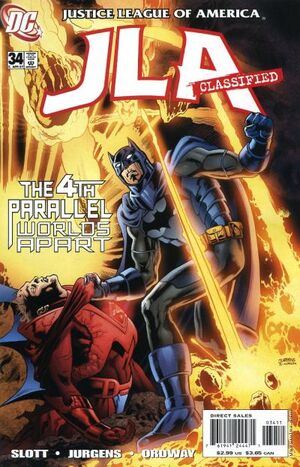 Appearing in "The 4th Parallel Part 2B: Worlds Apart"Edit

Synopsis for "The 4th Parallel Part 2B: Worlds Apart"Edit

Darrin Profitt's second attempt to destroy the Justice League goes disastrously wrong. In his Red King persona Darrin had crafted a doomsday weapon in an effort to extort the world into submitting to his supreme authority. The device accidentally goes off and Superman soon discovers that the world has ninety five hours before it is destroyed just like Krypton. The Justice League mobilizes a massive evacuation plan and after deciding to terra form Mars they go about gathering every creature and sample of plant life on the planet. Meanwhile Batman tracks down the man responsible and as the planet dies around him he makes sure that Darrin faces his final justice.

Retrieved from "https://heykidscomics.fandom.com/wiki/JLA_Classified_Vol_1_34?oldid=1436880"
Community content is available under CC-BY-SA unless otherwise noted.