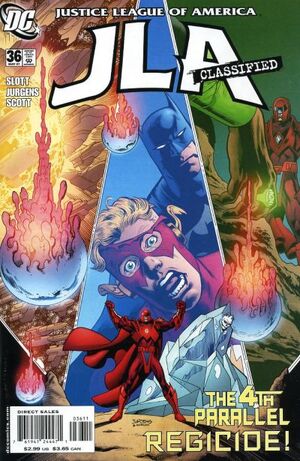 I am the Goddess of Truth. Yet you remain... a man of mystery. What I deserve is to know more about a man who professes such interest in me.

Despite certain misgivings that Superman and the rest of the League might have, the Red King from the reality where he chose to defeat the JLA by becoming a hero continues to win the love and devotion of the general public. Wonder Woman even admits her feelings for him after he reveals his true identity to her. Batman's suspicions are piqued when John Dee, who was catatonic when the Red King made his first appearance, starts repeating the supposed hero's name over and over.

While the version of the Red King from the reality where he killed the League grows bored in the realm of Doctor Destiny the Justice League from the world where the Earth was destroyed welcomes Batman, who had survived the planet's destruction. He even brought the men responsible and reveals what he believes had been going on. He also tells the League that the reality they exist in must die and eventually the rest of the League agrees with him, though Superman is the last to come around. With the aid of that Materioptikon that Batman secured from the Watchtower they manage to get Plastic Man to Dr. Destiny's realm before the Red King destroys their reality.

Plastic Man follows the trapped Dr. Destiny's instructions to stay quiet and plays an important part in convincing the JLA of the heroic Red King's world of what is going on. They draw out the "heroic" Red King and begin to fight him when the alternate Red King shows up. The two Kings argue and begin to fight. The "heroic" King drops his mental defenses and allows the Martian Manhunter to read his thoughts before the two Kings merge into one. The Justice League takes the battle to the Watchtower and trick the King into thinking that they had built the doomsday device from the reality where the Earth was destroyed. The trick works and the League is able to get the Red King back to Dr. Destiny's world where Destiny is free and wants revenge. The League places the Materioptikon in its trophy case and after discussing the two Plastic Men merging into one they renew their resolve to protect the world that they hold so dear.

Retrieved from "https://heykidscomics.fandom.com/wiki/JLA_Classified_Vol_1_36?oldid=1436882"
Community content is available under CC-BY-SA unless otherwise noted.