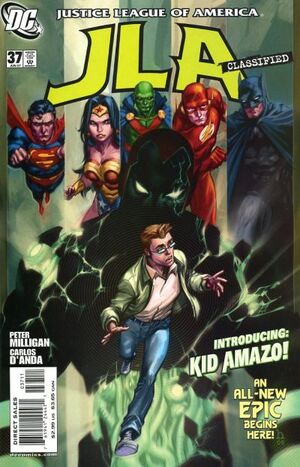 Appearing in "Kid Amazo, Part 1: Into the Abyss!"Edit

Synopsis for "Kid Amazo, Part 1: Into the Abyss!"Edit

During a battle between Amazo and the Justice League, college student Frank Halloran watched helplessly as his girlfriend Sara was nearly killed by falling debris. Amazo seemingly saves her before escaping. Sara wonders why Amazo would do such a thing, which Superman writes off as happenstance.

Later Frank is seemingly kidnapped by Amazo, who reveals that despite all of his memories to the contrary Frank is a cyborg created by Professor Ivo to join his "father" in their quest to destroy the Justice League. To prove his point Amazo throws Frank to the ground. Frank discovers his abilities but rejects Amazo's offer and threatens that if he ever sees Amazo again he'll destroy him.

Retrieved from "https://heykidscomics.fandom.com/wiki/JLA_Classified_Vol_1_37?oldid=1436883"
Community content is available under CC-BY-SA unless otherwise noted.