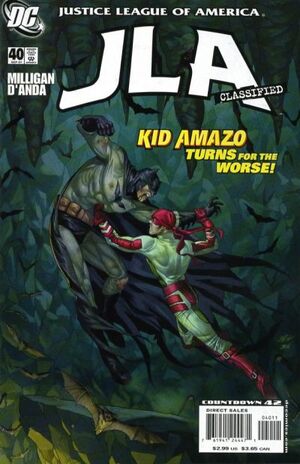 Appearing in "Kid Amazo, Part 4: Human, All Too Human"Edit

Synopsis for "Kid Amazo, Part 4: Human, All Too Human"Edit

Frank Halloran watches as his now ex-girlfriend Sara walks away after breaking up with him. Wonder Woman had told Sara about Frank's true nature as "Kid Amazo" and broke things off, which led Frank to believe that Wonder Woman is evil. Just as he begins to contemplate the philosophical implications of whether his thoughts are his own or just programming when he notices a red blur dash into an alleyway.

The red blur was the Flash, who joins the rest of the Justice League just in time to debate whether or not Wonder Woman was right in telling Sara the truth about Frank. Batman believes it was a good call while the Flash would have preferred to have had the group vote on the subject. Regardless Superman suggests that since they're reaching a critical stage in the battle for Frank's soul that the League should begin twenty-four hour surveillance and be ready to respond at a moment's notice. In the shadows Frank watches and then disappears.

As Superman and Batman prepare for Frank's eventual attack Kid Amazo begins to revel in what could possibly be his evil side. He uses his powers to get the criminal gang called the Alpha Punks free from police custody on their way to Arkham Asylum, but even in doing that Frank was probably saving them from going crazy there.

Batman watches a news feed of the prison break just as Kid Amazo makes his move. After Frank enters Batman's inner sanctum the Dark Knight traps him between two giant steel doors. At first Frank thinks that breaking out will be easy until the green Kryptonite that Batman laced the doors with starts to take its toll on him. Frank manages to escape by cracking Batman's lock, which was a kind of personality profile key. All Frank had to do was access Batman's "abilities" and the rest was easy. The two fight with Frank taking an early lead. He demands that Batman call Wonder Woman to the scene to answer for what she did. Batman tries to reason with him but to no avail. A quick tap of his utility belt allows Batman to send out a high-pitched noise that summons a large number of bats from deep within the cave.

Frank flies off and crashes into Sara's house. The police arrive shortly and Frank tells them that all he wants is to deal with Wonder Woman and that she should come in person and alone or Sara gets hurt. Sara, like everyone else, tries to reason with him and insists Wonder Woman won't come. Frank gives her an ultimatum; take him back or he'll kill Wonder Woman. Sara informs him that his behavior is rather pathetic. Frank fires back that his reaction is very human and that people have been turned bad for worse reasons.

Wonder Woman and Flash get to Sara's house first. After telling Flash that Frank really doesn't want to hurt her Wonder Woman is tackled by Kid Amazo and the two begin to fight. Wonder Woman yells for the Flash to get Sara to safety just as the rest of the League appears. Batman tells him that while he may be the son of Amazo with the ability to replicate each of the League's individual powers there is something else he needs to know.

Retrieved from "https://heykidscomics.fandom.com/wiki/JLA_Classified_Vol_1_40?oldid=1436886"
Community content is available under CC-BY-SA unless otherwise noted.