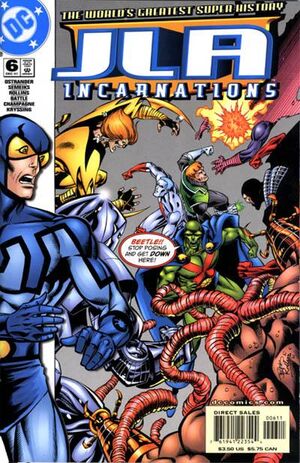 Extreme Justice invades Bialya, where the current ruler has created an army of cyborgs to do her bidding. Media reaction is mixed, as America greatly fears Bialya, and the U.N. requests that all three versions of the League disband.

In Gotham, Batman meets Superman and the two agree that they will both be a part of whatever new League arises from the very beginning to provide vision and a focus.

Retrieved from "https://heykidscomics.fandom.com/wiki/JLA_Incarnations_Vol_1_6?oldid=1674829"
Community content is available under CC-BY-SA unless otherwise noted.