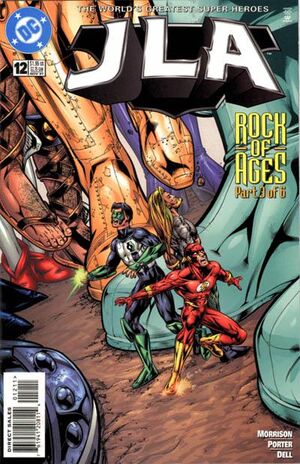 Green Lantern arrived in the Watchtower to tell the JLA how he and Green Arrow was approached by Circe. However, they have their own problem: Metron of the New Gods has approached them, asking for their assistance tracking down the Philosopher's Stone. He hands then a set of "Baby Boxes", connected to his Mother Box across all of creation, and while Aztek stays behind to keep the Watchtower going, Flash, Green Lantern and Aquaman go through a portal which will bounce them across reality until they find the stone. They trust Metron...

Green Lantern's first stop is a strange Earthlike world, where he fights an alchemist. His second stop is a field of flowers that trap him in an illusion of success. As the journey continues, he finds himself in a swamp with the corpses of all the heroes who died searching for the Philosopher's Stone. And there he has a close encounter...

... or so he tells Mote, the person who has just found. He is now on Wonderworld, headquarters of the Theocracy, and the last outpost of rational space before the Eternal Dark. Flash and Aquaman have already arrived, and Green Lantern wants to see them. But Wonderworld is a big place.

Around Earth, Lex Luthor is shocked. He has just destroyed the decoy Injustice Satellite with Superman and Martian Manhunter - for all he knows, he may have just killed Superman. Joker doesn't respond well. However, the heroes are still alive: Superman's new energy powers let him absorb most of the explosion, and the two have a plan. Flying back to Earth, they grab a mass of rock the same size as the destroyed decoy and throw it into space.

On the real Injustice Satellite, the Injustice Gang are celebrating the first phase of their plan. Circe arrives with a new member: Green Arrow, who says he is helping them for his father's sake.

At the Watchtower, Aztek is about to ask Metron where he sent the other heroes, but the New God teleports away. Lex Luthor calls the Watchtower at the same time, to make a revelation: he paid for a large chunk of Aztek's training, just so he could have a man on the inside. If Aztek refuses, he will destroy the Watchtower with a set of atomic weapons. Lex Luthor does not believe in the Shadow God, but Aztek does - and if Aztek refuses, he will die knowing he failed in his duties.

On Wonderworld, Green Lantern is being led through the Museum District to his friends. He is about to tell them what he saw in the graveyard, when they are led to speak to the leaders of the Theocracy - a group of beings the size of buildings. Green Lantern tells them the story: in the graveyard, he met a being called Hourman, the Master of Time, who hailed from the far future. He told Kyle that unless they affected the outcome of the JLA's battle against the Injustice Gang, Earth will be turned into a slave camp. The Theocracy, cannot leave their posts, but Aquaman demands that they help them return to their starting point. There is one option: the Glimmer's Hyperwheel.

The Hyperwheel, it turns out, is merely an infinitely more advanced version of the Cosmic Treadmill. With the Flash dragging his two friends in his wake, they use the Hyperwheel to home in on Metron's Mother Box. With the power of the Hyperwheel, Flash is off, traveling so fast that the three heroes leave real space.

On Earth, Batman is finishing his negotiations with Mirror Master, the only mercenary in the Injustice Gang. He warns them that they have four minutes. As soon as he breaks contact, Batman gets his remaining teammates moving.

Aquaman, Flash and Green Lantern re-enter the real world in Earth orbit. They think they are fine, but when they see that Europe has been replaced with an Apokoliptian Fire Pit,they realize that they still have a long way to go...

Retrieved from "https://heykidscomics.fandom.com/wiki/JLA_Vol_1_12?oldid=1436928"
Community content is available under CC-BY-SA unless otherwise noted.