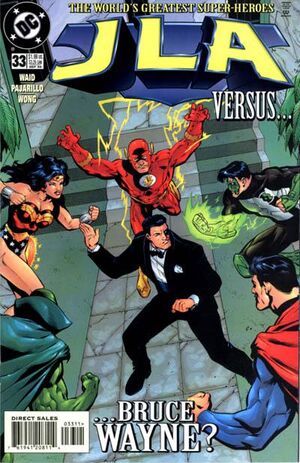 The Flash that appears in this issue was supposed to be Wally West, but between the time it was written and printed, Walter West had taken over the mantle of the Flash over in the The Flash comic; in addition, the tone of his dialog is more in line with Wally than the much gruffer Walter. The image used was pasted on after the fact.

Retrieved from "https://heykidscomics.fandom.com/wiki/JLA_Vol_1_33?oldid=1674768"
Community content is available under CC-BY-SA unless otherwise noted.